And we have Proof Positive to thank.  Thanks, Proof.

All my incumbents in Idaho are considered safe.  It is Idaho, after all. So, I'll be spreading my money around the country.

Back in halcyon years of old (2010), some conservative bloggers put forth a plan where, a poll would be taken of conservative candidates around the country and the winner would be the recipient of a ten dollar contribution to their campaign from each of the participants. Forgive me for not taking a poll, but there are only nine Fridays between now and the midterm elections. Our country has not had a budget passed in the Senate since 2009, forcing a series of continuing resolutions which keep the nation at the brink of a shut down and masks the obscene amounts of money that the President and Congress want to spend. Hundreds of bills passed in the House are not even brought up for a vote in Harry Reid's Senate.

Focusing on the Senate races (Republicans need just six seats to oust the bottleneck, hyper partisan Harry Reid as majority leader), is it worth ten bucks a week (two lattes?) to eliminate Reid's control and give the Senate responsible leadership again?

With that in mind, this week we look to the open Senate seat in GA. Can you contribute just $10 to Senate candidate David Perdue?

Real Clear Politics has Perdue up 3.8 points on the average, but rates the state as a toss up.

You can contribute to David Perdue here. Good luck and Godspeed, David!

(If you mark your contribution as "Ten Buck Friday", they'll see if the blogosphere can give them a little bump.)


Be sure to visit our fellow Ten Buck Friday bloggers: 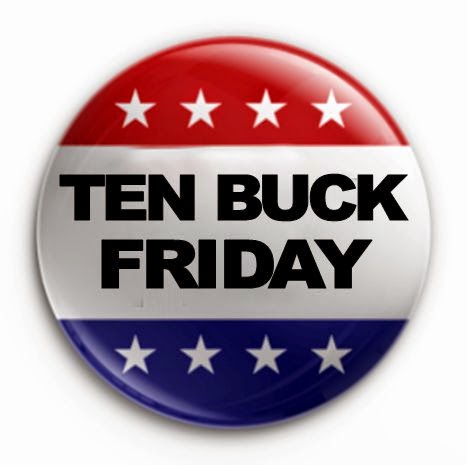 On Tuesday, I posted an article informing my readers that a cadre of conservative bloggers were banding together to relaunch a movement called “Ten Buck Friday”.  Four years ago that cadre was determined to help elect fiscal conservatives to Congress.  That was the year that Republicans handed The World’s Most Dangerous Community Organizer a “shellacking”.
Political strategists agree the House is solidly in GOP hands, and no one thinks the November midterm elections will change that.  House and gubernatorial contests pale in comparison to the question of who will control the Senate next January.  If Republicans win back the Senate, it could have a profound effect on the president’s final years in office and on the future of the Republican Party.
“Ten Buck Fridays” will concentrate on the Senate races of Republicans vying for seats to effectively put this Administration in an “oversight headlock” and rid the Senate of Harry Reid's obstructionist leadership..
Larry Sabato has already called the races in Alabama, Idaho, Maine, Mississippi, Nebraska, Oklahoma, South Carolina, Tennessee, Texas and Wyoming as “safe” for Republicans.
This week I have chosen to highlight what strategists agree are the most vital seats to win:
A victory for Thom Tillis (R-NC) could determine whether the Senate remains in Democratic hands.  Iowa is supposed to be the Democrats’ firewall, but State Senator Joni Ernst has the enthusiasm of Republican circles.  Cory Gardner (R-CO) is running a highly competitive race and a GOP victory would make would make it much more likely that Republicans would win control of the Senate.  Bill Cassidy (R-LA) and Tom Cotton (R-AK) are giving fits to Mary Landrieu and Mark Pryor.
Real Clear Politics shows Tillis up by 1, Ernst up by 0.2, Gardner down by 1, Cassidy up by 3 and Cotton up by 1.7 points in their most recent polling.
With all that said, what is “Ten Buck Friday?”  Each Friday between now and November 4th we are asking our readers to consider contributing $10 to the campaign of the candidate(s) we have highlighted that week.  Make sure to mark your contribution “Ten Buck Friday” so the candidate will know the blogosphere is with them in standing guard over liberty.
Contribute to Thom Tillis here.
Contribute to Joni Ernst here.
Contribute to Cory Gardner here.
Contribute to Bill Cassidy here.
Contribute to Tom Cotton here.