The Beuroweenies are Putting Our Safety at Risk...

with shutdowns and mask mandates.

Yesterday the pontificating beuroweenies at Panhandle Health re-issued a mask mandate - this time in the five northern counties of Idaho.

I will not wear a mask. Ever.

One of our local patriots, Casey Whelan, just posted a video of the complaints to the police department in Coeur d'Alene against businesses or individuals not wearing masks. Some of these calls were even made on the 911 line. Are you freak'n kidding me? 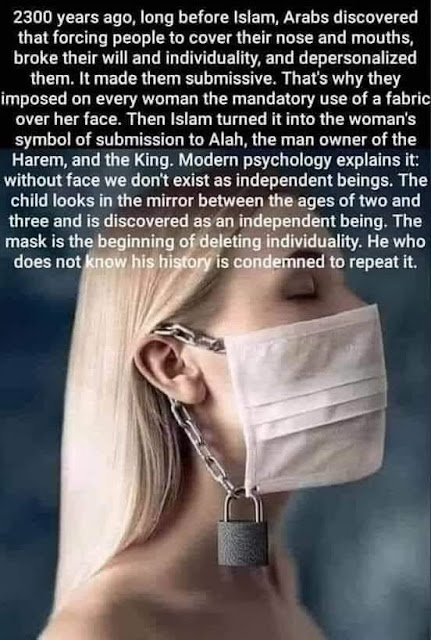 Different states and cities are putting in curfews since apparently you can only catch Wuflu between 10 pm and 5 am., and demanding you wear masks in your home.

On Wednesday I popped into Wallyworld and our local grocery store.  I was shocked at how many people were wearing masks. I did have a nice conversation with an un-masked lady, probably in her late 80's, who had no problem saying, "It's all about fear and control"  And another chat with a nice lady (also un-masked) in the frozen veggie aisle comparing our recipes for our home-made doggie food.

I have yet to encounter anyone being aggressive towards me due to my being unmasked.  However, with this new mandate, I fear that may change. Am I to be forced to shop at 3 am in order to feel safe? The mask Nazis who attacked me on Costco Insider sounded pretty dang violent and unhinged.

My take on masks back on September 2 -

The Covid Scam: People - TAKE OFF YOUR STUPID FILTHY MASKS!...

And what the hell is going on with Tucker? Does he have a death wish?

As Fox News slides into its new CNN lite format, some conservatives are in denial. But Tucker, they cry. They will boycott the rest of Fox -- except for Tucker Carlson, Sean Hannity and Laura Ingraham.

That's like giving up alcohol for Lent except for beer, wine, and bourbon.

Its prime time shows are its biggest moneymakers. Giving up Cavuto or some other minor show means nothing to Fox. The big money is in prime time. That is why they call it prime time.

And Carlson is laughing at his conservative viewers now. Last night, Carlson crapped on Sidney Powell for not going on his show and proving the president's case.

Who does he think he is? Chief Justice Tucker Carlson? read the rest