turning it into a celebration of all things homosexual, Communist, and sexy routines on the ice complete with wardrobe malfunctions.

The only event that ever held any interest for me in the winter Olympics is ice skating.  Each year it has gotten worse with focus on jumps instead of grace and beauty.

This year some couple were warned to change their routine since the judges thought the man's face was buried in the woman's crotch for way too long.  And the skater from So. Korea almost had her top fall off when it was clear to anyone that without a stabilizing string across the back at shoulder height would almost guarantee such a mishap.  Did they not test the costume first - or was it planned? 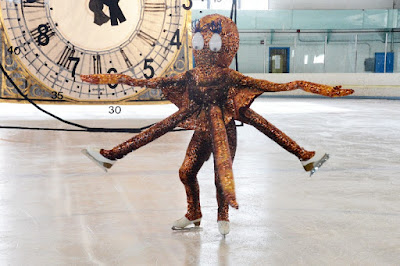 And then we have the women skaters waving and flapping their arms about in truncated and abrupt poses making them appear like demented octopodes.

Ladies - hold your positions long enough for us to admire your form.

I'm not even going to get into the whole " open homosexuals are in Olympics and isn't that just peachy keen and open minded" because we all know that who you have sex with has everything to do with, well - everything.

Crazy old Communist bat defends North Korea.  Does she think it's a utopia like my libtard bellwethers think Cuba is??

I really like my Paperwhite.  I still read plenty of "real" books, but I  find the Kindle very handy also.