Mental Health - Yours, Mine, and the world at large...

First off, apologies for my long silence.  Not only have I been shocked into silence by recent goings on, but I was badgered into having a tetanus booster shot about a month ago.  I was unaware that it also contained a vaccine for pertussis and diphtheria. It did not go well.  The first week I suffered chills, fever, aching muscles, and a production of mucus worthy of a rhinoceros.  Thinking I was okay after a week I relapsed the second week.  I'm still not a hundred percent.

I just started taking NAC (N-Acetyl Cysteine) yesterday and it seems to be helping.  From all my research it seems that everyone should be taking this for free radical protection.  As always - do your own research.

What has so shocked me into silence?

Seeing and hearing a Trump rally referred to as being reminiscent of a Nazi rally. 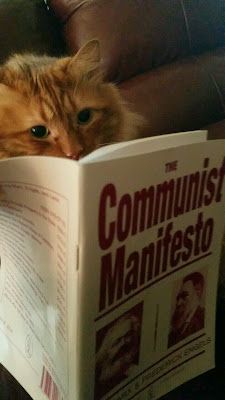 But to downplay the Holocaust and the suffering and death that resulted by referring to a Trump rally as a gathering of Nazis is reprehensible and stupid - do not forget "stupid."  Only a person completely devoid of any historical knowledge would say such a thing.

I've devoted hundreds of hours in an effort to understand the commie libtards.  I get that some of them are psychopaths or malignant narcissists.  I also get that most have been ill-educated in state-run schools. But there is one overriding factor that pops up - lack of any meaningful belief in God and little to none when it comes to church attendance.

There is no way around the fact that to espouse communist viewpoints is to essentially be an atheist and stupid - do not forget "stupid."

Lloyd Marcus:  We Must Say No to the 1619 Project in Schools (Lloyd is spot on - as usual)

Bunkerville:   The Economist alarmed that poor people are eating more meat around the world

Save up to 30% on Educational Toys for Kids