Has this past week been the weirdest ever?...

as you've probably noticed it has rendered me speechless.

I've spent an entire week watching the attempted destruction of this great country accelerate to mach 3 by the satanic members who populate the left - aka communists.

The crazy has gotten so bad there is simply nothing to say.

Today Nancy Pelosi and the rest of her evil coalition gathered together in the people's house to call our president a racist.  That is not what they were elected to do. 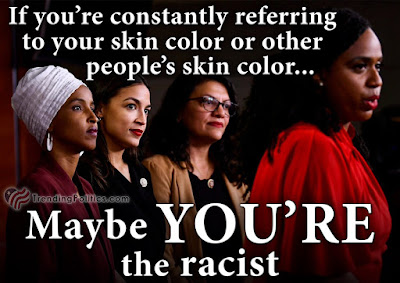 Why in hell are these nimrod anti-American, Jew hating, racist women graced with a cute little name?  Really!  Someone explain that to me.

These four women are repulsive.


Urban Dictionary describes squad as:
(emphasis mine)
1. Crew, posse, gang: an informal group of individuals with a common identity and a sense of solidarity.
2. A word overused by teenagers that think they’re ghetto to describe their clique of friends. Usually screamed in the hallways at high school or used as a hashtag in Facebook and Instagram posts.

Sounds about right to me.

We're sick of it!  We're sick of being called names, ignored, and lied to by the purveyors of fake news.  The ignorant anti-American commies who populate the left are too brain dead to fact check anything. We're tired of being shadow-banned, demonetized, and kicked off of platforms.  And I'm thinking that we're not going to put up with it much longer.

Kellyanne Conway speaks for me. Beautifully! And I thank her.