Commenter "The Other Dave Miller" lets loose on Alexandria Ocasio-Cortez...

and we thank him.

Ordinarily, I ignore most news about Empty Cortex, but a few days ago she called General John Kelly a coward for not apologizing to congressclown Frederica Wilson (D-Fla.) .  Empty Cortex accused Kelly of lying about the clown.  Did he?  No.

"The Other Dave Miller posted this comment on a post yesterday and I think we can safely say he speaks for most Americans.


Alexandria Ocasio-Cortez the ignorant, mush-headed, ex-Bartender, now the newly elected Democratic Socialist Child Congress person is also very disrespectful! She actually disrespectfully attacked General John Kelly for Kelly's verbal slap of Frederica Wilson for her lack of honor, for what was said between the President and a Gold Star family.

A retired 68 year old U.S. Marine Corps General who is the White House Chief of Staff for the President of the United States who had enlisted in the Marine Corps during the Vietnam War and then commissioned as an officer. He was later deployed to Iraq, where he was the first Marine Corps Colonel to serve in an active combat zone, and then promoted to Brigadier General.He rose through the ranks, eventually serving in his from 2012 to 2016 as a four-star General.

The half witted, former Community Organizer, self admitted socialist moron insisted that General Kelly owes Frederica Wilson an apology, accusing him of “COWARDICE” if he chose not to do so. 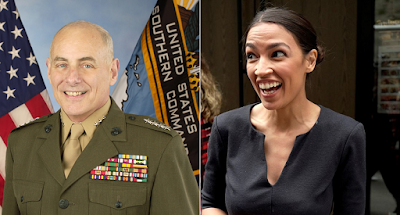 For her stupidity and poor choice of words, and her comments Ocasio-Cortez was slammed by White House adviser Kellyanne Conway. In defense of General Kelly, Conway stated:“This country owes him (General Kelly) a debt of gratitude, not the nonsense that’s been spewed about him, even recently from the left and from this 29-year-old congresswoman who doesn’t seem to know much about anything when you ask her basic concepts about the economy, the Middle East, military funding — really embarrassing”

Alexandria Ocasio-Cortez can insult and name call all she wants in regards to the General, but one thing she can NOT legitimately do is call the man a “Coward'” The man has lived a live of service to his, and our country, has also fought in some of the worst places on this planet, in hell holes, and in deserts, and has done so willingly in “service to this country”, something I assume she thinks she that so many of our Brave Men, and Women are currently doing today, Right Now, And Every Day!!

She is an embarrassment to the Brave men and women on both sides of the aisle who have served our county here in America, and everywhere across the ocean.

General Kelly, himself, will brush off Alexandria Ocasio-Cortez STUPID name calling comment because it was made by an insignificant MORON, as she is has proven herself to be too dumb to know what she is talking about no matter what the subject is about. Others, like myself, who have served our country, however, takes it a little bit more personally.

I can not help but look at her and think IS THIS WHAT THE FUTURE OF OUR COUNTRY IS GOING TO BE LIKE? Are we going to have our counties leaders to be as disrespectful of this country and to the men and women who have unselfishly served and sacrificed themselves to protect us in their service. This is the kind of person that you Liberals elected to Congress to represent you and me, and our families. It’s already pretty obvious that this women will be your new Hillary Clinton in the years to come. And she will be my Nightmare.

Day 11 of 12 Days of Christmas at Amazon

Don't forget - if you use my links to go to Amazon for your Christmas shopping I receive a small commission - at no additional cost to you.