What is all this G20 crazy crap going on and why should we care?...

because I sure don't.

Holy Carp - I just got home and realized I never hit the "publish" button.  Well - duh!

A whole bunch of world "leaders" spend untold amount of money to gather together and glad hand each other.  I guess they're going to talk about global warming - or some other pointless crapola.

While they're having a party the deranged scurvy looking violent anti-capitalist protesters are sucking up public money in the form of extra police to quell the disturbances. And they hope to accomplish what exactly?


And wow - just look at the hysteria surrounding the Putin and Trump meeting.  Trust me on this:  They're both laughing their asses off. 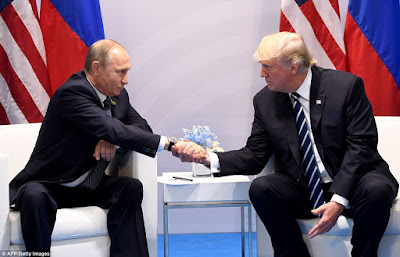 Quick!  Look!  Trump and Putin shaking hands.  Is this supposed to be some sort of private tete a tete in front of a gazillion cameras and hundreds of photos being snapped?  Notice also who's in control of that hand shake.  Hint:  it's not Putin.

You want to know how stupid people are?  One of the comments on the Youtube video of Trump's Warsaw speech (magnificent) said, "Did he just call the president of Poland "dude"?  That proves how stupid Trump is."  I. kid. you. not!

The Lovely State of Oregon Turns Even Uglier

Need an abortion?  Oregon will see to it that it's free - for everyone.

My comments in red:

Oregon Gov. Kate Brown said Thursday that she plans to sign a sweeping, unprecedented bill requiring insurers to provide free (no such thing as free) abortions for their customers, including illegal immigrants.

“The ability to control our bodies (the time to control your body ladies  is before you spread your legs) and make informed decisions about health (what's abortion got to do with health?) are critical to providing all Oregonians the opportunity to achieve our full potential and live productive, thriving lives,” (unless you're the dead baby) the Democratic chief executive said in an email. “Attempts to deny access to contraceptives (no one has denied anyone contraception) and family planning (euphemism for killing babies) are an attack on all Oregonians, particularly women of color, low-income and young women.” (it's called eugenics, you fool - let's kill as many black babies as we possibly can)

The $10.2 million bill, which cleared the state House and Senate with no Republican votes, also comes as a badly needed boost for Planned Parenthood’s Oregon affiliate, (because God knows they need to make more money so they can pay PP president Cecile Richards 1 million per year) which helped write the measure (who elected PP to be representatives for the people of Oregon?) and pushed for its passage as it struggles to keep its doors open.

My disgust know no bounds.

I'm off to get a hair cut, visit Costco (yay!) and otherwise decompress from the wretched news - both fake and real, while our predicted high today is 100°.  Remember when cars didn't have a/c?  I do.

The third annual Prime Day will be Tuesday, July 11, 2017, with hundreds of thousands of deals exclusively for Prime members around the world.  The deals start at 9pm ET on July 10.  I'll do my best to ferret out the winners for you.