While CNN Obsesses About a Tweet Rep. Steve Scalise is Readmitted to Intensive Care Unit and Poland Cheers Trump...

CNN is so inept they can't even blackmail the right person.

It's obvious they've never heard of the Streisand Effect.


Meantime, Steve Scalise, who suffered devastating wounds at the hand of an insane libtard, struggles with his recovery.

House Majority Whip Steve Scalise was readmitted to ­MedStar Washington’s Intensive Care Unit today. He is listed in serious condition (downgraded from fair) due to new concerns about infection. The hospital did not elaborate on these concerns.

Scalise’s condition had steadily improved since mid-June when he was shot by a left-wing gunman who trying to carry out the mass assassination of GOP members of Congress. The Louisiana congressman was released from intensive care nine days after the shooting.

Now, however, he is back in intensive care. The hospital promised to provide an update on Scalise’s condition tomorrow (Thursday).

Trump and Melania in Poland:

President Donald Trump spoke to thousands of cheering Poles in Warsaw on Thursday, calling their nation "the geographic heart of Europe" and praising their countrymen for shaking off both Nazi oppressors and Russian occupiers in the last century.

"In those dark days, you have lost your land but you never lost your pride."

Trump delivered his address in Krasinski Square, at the foot of a statue commemorating the 1994 Polish uprising against German occupiers.

He and first lady Melania Trump laid a wreath at its base.

Speaking behind bulletproof glass, he said Poles are "a people who truly know the value of what you defend."

After studying the history of Poland many years ago, I was always disturbed about the way Poland has been treated.  It made Polish jokes sound not very funny.

I suggest that we all quit paying attention to CNN tweets and instead listen to the original source of all their angst.

“Just as Poland cannot be broken, I declare today for the world to hear that the West will never, ever be broken. Our values will prevail, our people will thrive, and our civilization will triumph.”

Isn't it lovely to have a president that doesn't go all over the world trashing the U.S.A. and stands proudly for Western values?

This is a very powerful speech. 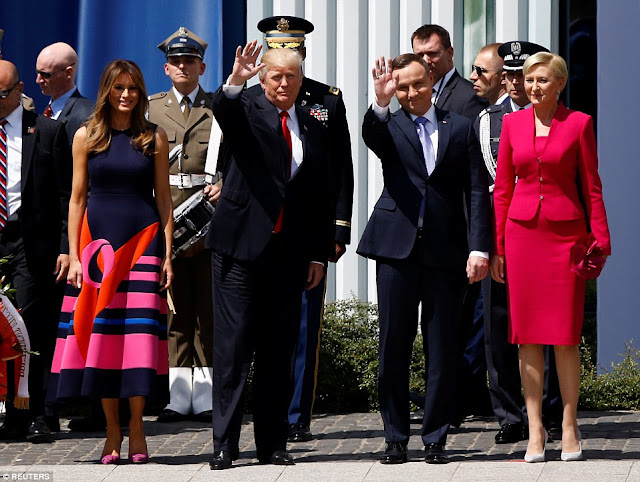 Except I was sleeping and missed it.

The temperature is inching toward 100° which is 20° beyond my comfort level. By 10 am I'm pretty much locked in the house enjoying our portable air conditioner.

And just for fun:

Mark Steyn weighs in on CNN:

I must state that Tucker Carlson is huggably cute when he smiles.

Okay - this is cool.  I can think of many reasons to have such an item:

Other great deals at Amazon today

Help Chez Adrienne by purchasing your Amazon items through our links.  We get a tiny commission which adds nothing to your purchase price, but helps us pay for the portable air conditioner.  We thank you in advance.