because it's making you stupid.

Is there beginning to be a backlash against smart phones?

I popped over the Costco yesterday to grab some milk and a six pack of Moleskine notebooks and had an interesting discussion with one of my former Costco co-workers who is assistant manager of the store. 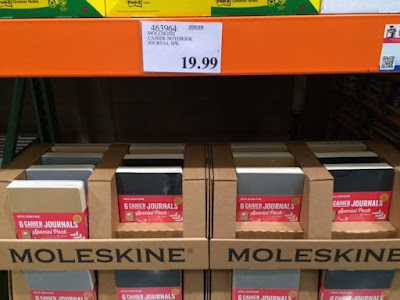 He was interested in the fact that I was buying those notebooks and wanted to know if I was one of those "pen and paper" kind of people.

"Well, yes.  I never met a scrap of paper, notebook, or pen I didn't feel an urgent need to add to my life."

He then questioned me about different tech things in my life.  When he asked about my phone, I whipped out my little basic Tracfone and he thought that was hysterical.

"Why in heavens name would I need an iPhone?  I'm home most days and have a perfectly useful PC" (which I spend waaaaaaaaay too much time surfing.)

I did assure him that I wasn't a complete Luddite by informing him that I did own a Kindle Paperwhite.  That seemed to ease his mind a bit.

I've been struggling with the deleterious affects of too much computer use and reliance on "research."  It seems I can no longer do the most basic of activities without copious amounts of research.  I've been making chicken salad for over 50 years and yet yesterday I had to Google chicken salad recipes.  WTHell? And while I'm on the computer I'm constantly flitting about from one tab to another - sometimes while in the middle of an article.  My dog has a longer attention span.

After watching the fine video below (while continuing my flitting as it played on anther tab), I thought back to yesterday at Costco and guess what?  I don't recall seeing one person in that entire warehouse with their nose stuck in a phone.  I perused the peeps sitting in the food court and no phones were in sight there either.  Hmmmmmm.  Even a few months ago you would have witnessed many people ignoring friends and family in favor of their phone.

Two days ago I was at our local grocery store and also do not recall seeing one phone.  I don't even remember seeing anyone with a phone in their hand as they surveyed the cucumbers and thumped the watermelons. Are people starting to wake up?

I have nothing against tech.  It has opened up amazing vistas of knowledge and convenience.  I do object to tech running us instead of us running tech.

So I'm going to re-watch the video (highly recommended) and then go out and do some low tech weed pulling.

Speaking of tech - Prime Day at Amazon starts at 9:00 pm ET.  I have my eye on a lithium battery operated EGO weed wacker that I'm hoping will be discounted.

And for those who are still in need of an Instant Pot electric pressure cooker it's usually heavily discounted.  I will do my best to keep you informed.  Word is that it will be in the $60.00 to $70.00 range.  That's huge from a top price of $119.00.

If you're not a Prime Member, now is a good time to take advantage of the benefits.