The Ladies Who March™ are getting ready to whip out their pink pussy hats and march against the NRA...

this upcoming Friday, 'cause the good Lord knows it's the NRA's fault that people are killing each other with guns in Chicago.

What triggered all of this newest outrage? An NRA ad with Dana Loesche which I just watched for the first time moments ago and posted below.


We know that we are not safe. But we will not be intimidated into silence.

Recent actions of the NRA demonstrate not only a disregard for the lives of black and brown people in America, but appear to be a direct endorsement of violence against Women’s March leaders and all people exercising the constitutional right to protest. On July 14th, Women’s March and partners will mobilize a mass demonstration, again grounded in the principles of Kingian nonviolence, to denounce the false and intimidating rhetoric of hatred and send a clear message that our movement will proudly and bravely continue to strive for the respect of the civil and human rights of all people. 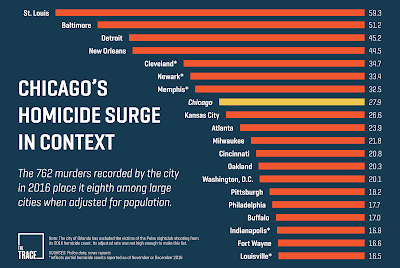 So somehow the NRA is responsible for 1,944 shootings in Chicago so far this year with 1,606 shot and wounded and 335 shot and killed.  If we look at the stats from 2015 we'll see that, when adjusted for population, some cities are even worse.

The top eight cities have a commonality in the number of black residents.  It's black people shooting other black people with guns that are, no doubt, not even legal.

A comment from an outraged feminazi on the Women's March Facecrap page:


The recent actions of the NRA demonstrate not only a disregard for the lives of black and brown people in America, but appear to be a direct endorsement of violence against all people exercising their right to protest (in particular this time Women's March leaders). I do not understand how some people do not see the point here. They would fight to their deaths to protect their right to carry a gun, but don't see the parity of defending their right to protest. We are all struggling to protect the same thing - our constitutional rights!


There ya have it folks - it's the NRA's fault, and by extension you, that black people are slaughtering other black people.  And somehow or anther the NRA is not defending their right to protest.

Listen up "ladies":  The NRA does not give a rip that you are going to gather in front of their headquarters tomorrow and then march seventeen miles to the Department of Justice in DC.  Protesters will have to hang out somewhere until the next morning for a rally at Justice.  Damn - that sounds like a great time in the heat and humidity of DC.

And further more, no one else cares either.  So knock yourselves out. Have a great time, go home and pat yourself on the back, have a soy latte in a cute little cafe, and commiserate about what a great job you're doing to stop violence.

You could make a bigger difference by staying home and doing something to serve your husband and your family - you know, sort of 1950's style.

Here's the NRA ad that set their little hearts a beating: