because we all need a break from politics.

If you search Amazon with the key word "habit" the first book that comes up is the best seller The Power of Habit: Why We Do What We Do in Life and Business, by Charles Duhigg.

Several years ago, based on the positive reviews, I bought the book, and hated it.  I thought it was a complete waste of time.  I linked to the book because my opinion is in the minority and you may profit from the information Duhigg gives.

Duhigg's has a bit of good information on how habits are formed, but didn't give very many real world actions to take other than substituting a good habit for a bad habit, such as replacing something like smoking with exercise.  If you hate to exercise that's not going to work, and frankly, I consider smoking as more of an addiction and not a habit.

There's another almost 10K results on Amazon based on that search if you have the time to peruse them. Obviously, people want to change a lot of habits.

Before we continue, allow me to inform you that I am not an "expert" in the field of neuroscience, productivity, or behavioral science. Let me also add that most "experts" in these fields are usually not really "experts" either.

What I can offer you is years and years (about 50) of study in these fields and a simple way to help you form new habits that support the life you want to live.  Because it's all about simple. My entire life I've always looked for a better, faster, and more efficient way to do any task, whether at home or at a job.  One of my motto's has always been, "There must be an easier way."  It's a habit of mine.

What is a Habit

A habit is nothing more than something we do routinely - usually without giving it much thought.  Some habits are good in that they enrich our life, and others we call "bad" because they hinder our life fulfillment.

Some habits are what I call neutral.  Having a cup of coffee first thing upon arising is neutral, neither good nor bad - unless you're allergic to coffee and drinking it may kill you, in which case it's a bad habit. 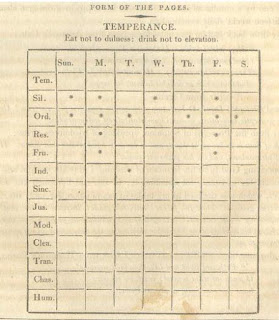 In 1776, Benjamin Franklin, at the age of 20, created what I think of as the first habit tracker.  He listed thirteen virtues down the left side of a page and across the top of the page were the days of the week.  Every day that he did not succeed in performing one of the virtues he got a little dot in the square for each time he failed. He devoted one week at a time to each of the virtues.  After thirteen weeks he started over. 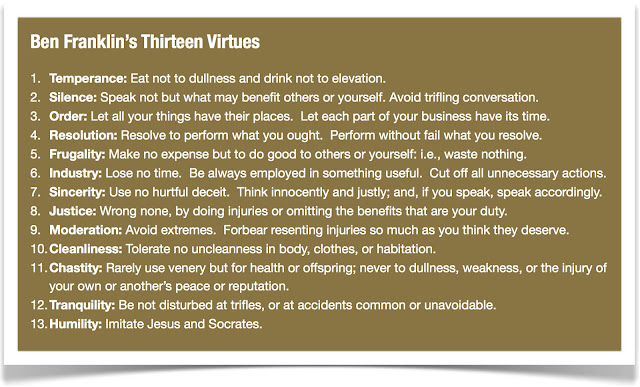 While Franklin's quest for moral goodness is indeed worthy, tracking a negative rather than a positive could be counter productive.  Who needs to be reminded on a daily basis all the ways they failed to live up to their expectations?  I'm not discounting the value of an examination of conscience on a daily basis, but that's not the best way to form new habits.

Let's take a moment to examine a real world habit tracker and forming good habits.  It's not so much about changing habits as it is forming new ones.  It's simple and effective, because who has time for complicated?

Decide on a few good habits you'd like to form.  I suggest no more than five. Let's say you want to read the Bible every day, write in your journal first thing in the morning, take your vitamins, go for a walk every day, and pick up your clutter.

If you scoot around the internet you'll find people wanting to list 30 or 40 habits on their tracker. DO NOT DO THAT!  Good grief - it's hard enough tracking 4 or 5.  After a potential habit on your tracker becomes a routine habit you can remove it and add more. 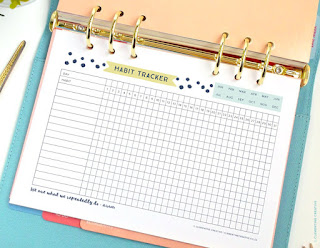 Print out a habit tracker or make your own on Excel.  My husband uses this one (I love people who make free downloadable stuff for us to use.) Guys - listen up.  Hubby is like most men and hates change. Yet from day one he loved the concept of a habit tracker.

I use my daily organizing journal and write in the habits next to each day with a little box that's blacked out if I succeed in performing the action.

Right now I have ⃗MP for morning pages, ⬎V for vitamins, ⬏F for fiber (not doing well with that one), ⬀TH for listening to my subliminal tapes, and ⬄ N for nap. I used to have ⬏E for giving my kitteh Erica fish oil, but removed it when I realized that forcing fish oil down the maw of an unwilling cat was not worth the trouble. It's okay to change your mind.

Try to link your new habit to a time of day.  Obviously morning pages are done first thing in the morning.  My vitamins are linked to breakfast, and the subliminal tapes are linked to internet perusal and post writing.  I don't have picking up clutter on my tracker yet, but I'm going to add that today and probably link it to after dinner.

As the month progresses and you're making your little x's or coloring in your squares, you will be forming a chain.  Guess what?  You're not going to want to break that chain.  Human nature will intervene and making your little x's each day is going to bring you a dopamine hit that will make you feel super good.  Who doesn't want to feel good? It won't happen immediately, but as that chain dances merrily across your page you'll be more and more unwilling to break it.

It's okay to list a bad habit that you wish to break.  But it's going to be recorded as a positive.  Say you want to quit swearing.  For each day that you don't swear, you get to make an x.  Gradually, without you even noticing it, your bad habits will be replaced with good habits.

Some super Amazon deals in HOME
and
DIY and TOOLS