March for Science and Earth Day...

Right now in New York City (streaming live on Facecrap) a 10 year old black kid is rapping about science.  I simply cannot make up anything more bizarre.  A bunch of people, who consider themselves to be adults, are chanting back at this kid "science is good."

I bumped into an article with recommendations on how these "scientists" are to present themselves to the ordinary dirt dwellers (that would be us.)

Here are just three of their seven tactical suggestions:

After these people get through rapping, they're going to head out and march to somewhere or another raising their heart rates and spewing untold amounts of evil gasses into the earth's atmosphere.  Not very earth friendly if you ask me.

I, on the other hand, will take this one day break in the rain to mow my lawn and plant ten trees.

the wonderful event wherein soy latte drinking yuppies can gather together to worship Gaia and insult and demean those of us who are really earth friendly.


Mark your calendars.  Tomorrow Today is the big day when the above mentioned people will hug trees that someone else planted, berate us for using Styrofoam, and claim life on this planet is about to end due to man-made global warming. 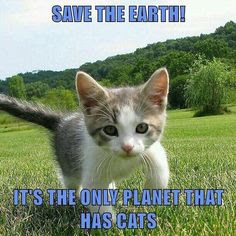 Carefully scrubbed from the Wikipedia Earth Day page, is one of the masterminds behind Earth Day who was an active participant in the first Earth Day celebration in Philadelphia (1970), Ira Einhorn.

Ira, that peace promoting wunderkind, earned his Master Composting Certificate by killing his girlfriend, Holly Maddux, and carefully composting her in a trunk that sat on his porch for 18 months before discovery.

His Composting Certificate was subsequently rescinded when the neighbors complained of a foul smell emanating from Ira's abode.  Proper composting should not smell foul.

The fun loving tree-hugger skipped bail and headed off to Europe where he resided in France until he was finally captured in 1997.  After a lengthy extradition process he was finally brought back to the U.S. in 2001 and is presently serving life without parole.

Please take a moment to say a prayer for Holly on Earth Day.  Thank you.

Closely aligned with Earth Day is Agenda 21, the UN sponsored program that seeks to end all rural living and pack us all into sparkly bright cities while ending our private property rights.  Can you say EPA?

I don't know about where you live, but the some of the cities that are most invested in this are some of the nastiest.  On my last trip to St. Paul, Minnesota (a breeding ground and haven for all things greenie-weenie), I was appalled at how dirty it is.  Oh sure, take a drive down the River Road where the runners almost outnumber the cars and everything looks fairly nice.  Drive two blocks away and it's a different story.

Meanwhile, those of us who are rural dwellers are planting trees, tending our gardens, conserving our energy, and doing proper composting - not making Soylent Green.

We're ranching, raising chickens and pigs, and growing all that green stuff you city dwellers scarf up in huge quantities.

So next time you encounter one of these latte drinking elitist snobs, ask them where the milk, chocolate and other goodies came from so they could sit around at a sidewalk table and deride those who actually do the work.

Ask them why it's okay to avail themselves of a plastic umbrella while telling us to carry our groceries in a cloth bag.

Ask them why they don't get off their lazy asses and sweep the curb in front of their house instead of waiting for the city to power up a gas hog of a street sweeper to do it for them.

Ask them why they don't hang their clothes out to dry in the summer.

Ask them why they're using a snow-blower instead of a shovel in the winter and why they don't turn off their air conditioning in the summer.

And finally, ask them if they've always been this stupid and arrogant or if it was a recent development.

The Blaze:  Scientists rally across US to ‘defend’ science — but closer look reveals a different motive

Here's a bunch of earth friendly deals at Amazon in Patio, Lawn, and Garden.