Bill Whitttle: What would you tell your pre-COVID self to help get through the past year?...(video)

thoughts as we move forward.

Stephen Green nails it when he says, "I would have gone rebel much sooner." It took him several months to go rebel. It took me about two weeks. Around our neck of the woods those stupid directional arrows in the grocery store aisles were largely ignored by everyone.  Surprisingly, most people didn't even notice them.

Scott Ott tells a touching story about his neighbor and how his thinking has changed over the past year. 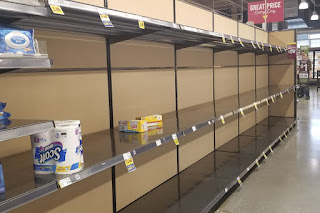 What I remember was how the masses decimated the toilet paper aisle. We practice what many scornfully call "prepping", albeit in a minor way, so we had plenty of potty paper and ended up helping out those who did not.

I have still not recovered from seeing masked up people. I never will. Masks are nothing more than a capitulation to evil and it appears some people will be wearing them for the rest of their lives. If that's their choice - so be it.

Bill Whittle calls this past year a drill to see how far the government can push the populace into acquiescing to their onerous mandates and demands. Turns out it was pretty damn easy.  The lesson here, my precious poodles, is be prepared for the next "horror virus."  Prepared is the operative word!

St. Patrick has Been Cancelled

Today is St. Patrick's Day.  Google has wiped his visage from their little graphic substituting everything green, as in "save the earth green."

Not to worry. We can still indulge in a day of cultural appropriation celebrating the man who is credited with bringing Christianity to Ireland. Today, everyone is Irish!