We all need a mental health break...

to sit back and contemplate the insanity.

It is not indigenous peoples day.

FROM THE WHITE HOUSE: Proclamation on Columbus Day, 2020.

On this Columbus Day, we embrace the same optimism that led Christopher Columbus to discover the New World. We inherit that optimism, along with the legacy of American heroes who blazed the trails, settled a continent, tamed the wilderness, and built the single-greatest nation the world has ever seen.

In commemoration of Christopher Columbus’s historic voyage, the Congress, by joint resolution of April 30, 1934, modified in 1968 (36 U.S.C. 107), has requested the President proclaim the second Monday of October of each year as “Columbus Day.”

NOW, THEREFORE, I, DONALD J. TRUMP, President of the United States of America, by virtue of the authority vested in me by the Constitution and the laws of the United States, do hereby proclaim October 12, 2020, as Columbus Day. I call upon the people of the United States to observe this day with appropriate ceremonies and activities. I also direct that the flag of the United States be displayed on all public buildings on the appointed day in honor of our diverse history and all who have contributed to shaping this Nation.

And - Hello, Columbus—Celebrate The Great Man!

As predicted, the Wuflu hysteria is ramping up.  Testing, testing, testing no longer means making sure the mic works.  Now we're testing healthy people for a virus. That makes no sense.

Not sure how you feel, but I'm sick and tired of hearing the totally fake news of 220K people dead from Wuflu.  Read my lips!! - it's a lie!

Cuomo is handing out hundreds of thousands of dollars of fines to people who don't follow his draconian rules. Want to go to church? Fugetaboutit!

NYC Cracks Down, Issues $150,000 In Fines For Failure To Comply With Shutdown Guidelines In COVID Hot Zones
Listening to the opening statements by members of Congress on the Amy Coney Barrett hearings is an exercise in wondering, "WTHell?" I finally had to turn off the sound with the dems blah blahing about the affordable care act.  I thought this was about questioning the nominee.  Guess I was wrong. You can watch it live HERE. Update: ended for today, but you can bookmark for tomorrow. 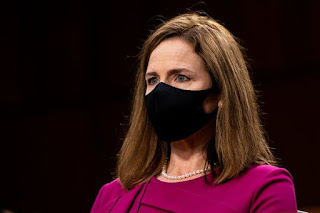 The vision of Amy Coney Barrett in her pretty pink dress with a repulsive black mask on her face, is disgusting, dehumanizing, and demented.
Wonder why the riots have sort of simmered down?  Except, of course, for Portland where pulling down statues has become a full time job.  Yesterday, Lincoln and Teddy Roosevelt bit the dust, and the rioters blasted out the windows of the Oregon Historical Society.
Bayou Renaissance Man has some interesting information about the upcoming chaos, both first hand, and by way of Second City Cop.  Is he right?  IMO - yes.
My only advice is to prepare physically and spiritually.
More:
Bunkerville: Biden Harris stealth campaign reaches new low
Ann Barnhardt wins today's "Best Title on the Internet."
CDC reports that running around all day with a damn filthy rag over your blowhole that you manhandle three times per minute magnifies the Masonic Sniffles. People still capable of rational thought declare in unison: “NO SHIT.”
Posted by Adrienne at 12:20 PM