Starting Wednesday off with a bang...

and an early morning trip to the emergency vet.

Our little Frankie doggie was distressed this morning and shaking his head and rubbing at his ear. About 5:30 I decided a run to the emergency vet was in order where he was sedated and some gunk removed from his ailing ear.

While we waited we indulged in a some sort of strange McDonald's breakfast biscuit thingy with ham and eggs accompanied by a little brick of pretend hash browns. Now my tummy feels like a garbage dump. However, the coffee was boiling hot and fresh - thank you Mickey D's.

Frankie is home and resting comfortably thanks to our wonderful emergency doctors.

While waiting in the parking lot a police car pulled in and I sauntered over to wish him well and thank him for his service.  When they came out to pick up his doggie (all Wuflu related strictures), I was expecting to see a big beautiful police doggie in the back. Instead, he was delivering a little poodle with no tags that had been hit by a car. And that's how the police in Post Falls roll!  Little doggie will be fine and is being transferred to a regular vet in a few hours.  A good use of my tax dollars.

Tomorrow I will be doing my patriotic duty and attending a meeting of Panhandle Health where they will once again try to pass mandatory masks for Kootenai County which includes Post Falls.  It was kicked to the curb just a few days ago, but this will actually be a public meeting where input from the citizens will be heard.  They've moved it to the government building downtown to accommodate more people. 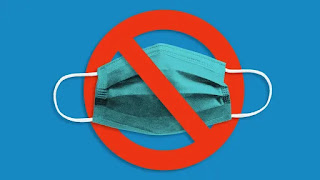 The early morning news is the mayor of Cd'A has said if Panhandle doesn't pass mandatory masks he will.  Glad I live in Post Falls since I think Panhandle will bow out of the controversy, particularly in view of probably 500 or more patriots showing up to voice our opposition.

I can think of a gazillion things I'd rather do than attend a meeting at 12 noon tomorrow, but I feel honor bound to do my part to keep America free.

Now I must go monitor Frankie as he staggers around the house with his tongue hanging out. Sigh...

Dems Side With Criminals

What else is new??