Gonzaga University in Spokane says NO! to Ben Shapiro speaking...

Mr. Shapiro’s appearances routinely draw protests that include extremely divisive and hateful speech and behavior, which is offensive to many people, regardless of their age, politics or beliefs,” Biggs Garbuio said in a response to the event request submitted by Gonzaga College Republicans President Olivia Johnston and obtained by Campus Reform.

“Gonzaga University is committed to the human dignity of every individual,” the administrator continued. “This is the core of our mission based on the teachings of Christ Jesus, and the foundations of the Society of Jesus. We stand in solidarity with vulnerable members of our community who may be targeted for discrimination, ridicule, or harassment by others.” source

Just exactly who is Gonzaga expecting to protest?  Surely not the lily white "Catholic" students who populate their campus.  And what exactly has Ben Shapiro ever said to go against this mythical mission statement?

Just about everything Ben Shapiro stands for and promotes is what every real Catholic should be supporting and promoting.  Funny that it takes a Jew to be more Catholic than a Catholic university. 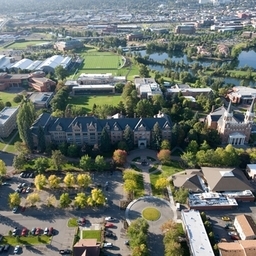 They might want to think about standing in solidarity with Jewish Ben Shapiro. What about his human dignity?

Their mission statement didn't stop them from hiring screaming commie harridan Melissa Click of Mizzou fame and renewing her contract for another year.

Back in 2011 I was already quite aware of Gonzaga being a hot bed of emerging marxist thought by it's happy clappy Jesuits.

Marxism and the Churches...

As I stated in that article:


Since most of my readers are not Catholic, I ask only that you consider this information in view of whatever church you do attend.  There has never been a doubt in my mind that certain areas of the Catholic Church, as well as most other mainstream churches, have been infiltrated with ideals espoused by Alynsky.  I would go so far as to call such trends outright Marxist.

Gonzaga is a private university and can ban whomever they want.  I get that.  But they shouldn't be hiding behind their "Christian mission" when they fail to teach the fundamentals of the Catholic faith.

I can guarantee by the time Gonzaga gets finished indoctrinating a bunch of ill-formed Catholic youth they will be card carrying marxists supporting every baby killing diversity driving democrat slug of a politician.

Up to 40% off Jewelry Gifts from Our Brands