support it - see it.

And take 5 friends with you to the movie.

We saw it on Monday and at the end no one moved until the credits were finished scrolling.  There was not a peep in the audience. The movie is that compelling. 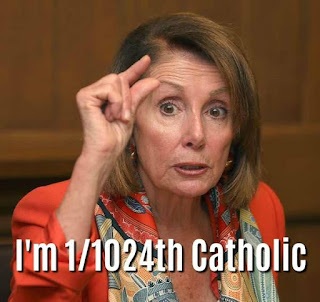 I saw this meme on Facecrap. While it's cute and somewhat funny, let's clear something up right now.  Nancy Pelosi is a public sinner by advocating for abortion and has effectively excommunicated herself. Canon 915 states that Catholics who are stubbornly contrary “in manifest grave sin are not to be admitted to Holy Communion.”  Pelosi does not even qualify for being 1/1024th Catholic.

When questioned about the moral difference between  what Dr. Gosnell did to a baby born alive at 23 weeks and aborting her moments before birth?


[...]At a June 13 (2013) press conference, Pelosi responded testily to a question by a reporter from The Weekly Standard asking her to explain the moral difference between what abortionist Dr. Kermit Gosnell did to babies at 23-25 weeks of pregnancy (for which he was convicted of murder and other crimes) and what happens in clinics where doctors carry out abortions 28 weeks into a pregnancy. Pelosi refused to answer the question and snapped at the journalist and said that she would not discuss the issue with him because he obviously had an agenda to undermine the “sacred ground” of abortion rights. In the same breath she described herself as “a practicing and respectful Catholic.” source

Notice the first thing out of her lying heretical mouth is to say: "Let me just tell you this. What was done in Philadelphia was reprehensible and everybody condemned it. For them to decide to disrespect a judgment a woman makes about her reproductive health is reprehensible."

Of course, with the advent of contraception, which effectively separates sex from procreation,  having sex with multiple partners has become the norm turning a women's vagina into a free playground - a sort of dipsy dumptser for sperm -  which in turn has led to the explosion of abortions that we are witnessing today because over 50% of abortions are performed on women using birth control as per Planned Parenthood.

Is that what these modern women call equality?

Thyroid Support by Nobi Nutrition 37% off


I receive a small commission when you purchase through my links and I appreciate it from the bottom of my deplorable dirt person militant normal heart!