Is Trump leading a sea change?...

The commie/marxist/libtards continue to have hysterical meltdowns, and it appears fewer people are listening. 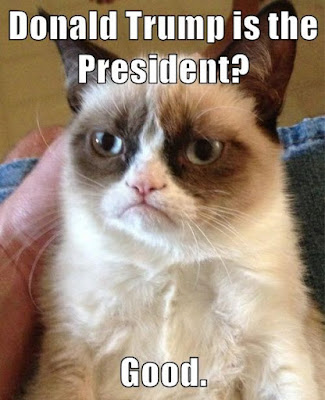 People like Jake Tapper have to spin wild tails of Strozok's bias for Hillary causing Trump's election, while the truth is that 8 years of Odumbo caused Trump's election.

The "ladies who march™" have slithered back into their (unkempt) nests and have to spend their time bleating slogans to each other.

The ratings on the lefty late night shows have tanked, CNN continues to be-clown itself, and the unhinged rantings of "entertainers" are only applauded by "people of the bubble™."

Sexy Paul Manafort the Great was stuck in the slammer today for no apparent reason other than to deflect interest in the IG report.

One thing I know for sure is there will be special place in hell for the venal baby killing sodomy supporting virtue signalling commie/marxist/libtard pukes.

Merkel is being challenged in Germany.  According to an opinion poll the majority of German's want the immigrants gone.  Now we know that polls can be slanted and are often wrong, but it still doesn't bode well for Merkel.

Italy elected a new prime minister who is strong on cracking down on illegal immigration and is anti-refugee.

Anti-migrant sentiment is on the rise in Sweden - a country that is being devastated by the unchecked influx of primarily muslims.

This is what real hope and change looks like.  Enjoy your weekend knowing that the adults are in charge.

Trevor Thomas at American Thinker:   Taste the Despair: Democrats Losing It over Trump

Save up to 50% on Tiki Torches, Fuel, candles and more.

Limited-time Kindle deal: Build your summer reading list this week
I'll be stocking up for sure!  Great deals...

Don't have a Kindle?  Get $20 off Kindle Paperwhite
While I still love a real book, the Kindle is mighty darn handy and I'm really glad I bought one.

I receive a small commission when you purchase through my links - at no additional cost to you, and I thank you from the bottom of my little shriveled dirt person heart.