5 Ways to save yourself from the commie/marxist/libtard brain eaters...

because they thrive on fresh brains and they want yours.

Fried, poached, over-easy - makes no never mind to them. 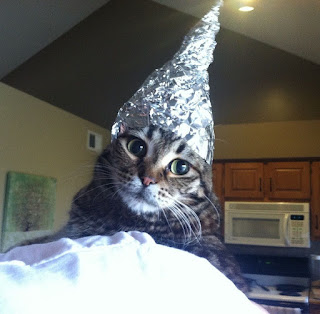 Will wrapping your head in tin foil upset their plot?  Maybe.  But who the hell wants to walk around in the summer with tin foil on their heads?

Obviously, I'm being silly.  Or am I?

The outrage of the week is illegal immigrant children being separated from adults who may or may not be their parents, but are most definitely people who are breaking the law.

If that is the criteria then we need to empty the prisons of criminals who are separated from their children.

How about the 96 million or so dead babies who were forcibly removed from their moms uterus?

And lets not forget the millions upon millions of children being raised in daycare centers who are separated for 8 to 10 hours from their parents.

So why the constant force feeding of this nonsense to our already over-taxed brains?

Because they want you brain dead, and they are well on their way to making it a reality.

If you think there are places giving you the "real" news, think again.  Yesterday Fox News gifted scummy Kathy Griffith with a headline because she told Melania Trump to "get fu*cked" and called her a "feckless complicit piece of sh*t."  And that warrants a headline - why?

Sure, Fox throws you the occasional "real" news, but our over-worked frontal lobes have to sift through the garbage to find it.

Our brains were not designed for an endless flow of information. It is not built to be a massive information storage processor.  The more we try to cram in, the poorer our thinking capabilities become.


What can you do now to stop the deadly brain eaters?

Along with point number one be very careful about your online research.  For instance, if you Google "great thinkers of the present day" you will be bombarded with site after site listing every godless  commie/marxist/libtard crackpot breathing oxygen and in an upright and locked position.

Now go out there and slay the day.