Is Grocery Delivery Just Another Way to Isolate Us?...

You may find an odd discussion for someone who purchases numerous items from Amazon, but an article at The Blaze today, Walmart announces expanded grocery delivery in attempt to compete with Amazon, set me to pondering this again. 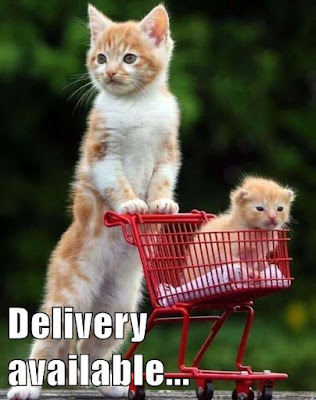 Yesterday, after history club and a haircut, I made a quick stop at Costco for a few items, and then headed off to Lowe's to purchase a threshold and wood for a baseboard.

While at Costco I had a long discussion with a nice demo person and several  shoppers.  At Lowe's, after finding what I needed, I popped into the garden department to peruse the plants and visit with the nice gentleman who had discounted a fig plant for me by half because it had a few damaged leaves. He told me how much he liked working for Lowe's and was pleased to hear my fig was sprouting a new leaf.

Behind all of this delivery and online shopping is the idea that we're all too busy to do anything so mundane as shop for our own groceries.  I'm not at all sure what people are so busy doing that they can't pick out their own lettuce.

The majority of the purchases I make from Amazon are for items I can't find locally.  Last week I shopped for 9 x 12 manila envelopes at Walmart. There wasn't any (really!)  I admit to not having time to make repeat trips to Wallyworld or drive to Coeur d'Alene to an office supply for envelopes.  So I came home, ordered them from Amazon, and had them in two days.

First - if you want to retain your customers, going head to head with Amazon is not going to work.

The only thing you have to offer people is good old fashioned service.  Our local Ace Hardware keeps getting bigger and bigger. The owner has stores in neighboring towns which are also expanding. After Walmart came to town many years ago they expanded the store.  In recent months they remodeled all of the stores and opened a new one.

Walmart is spending it's time fighting Amazon, while our local Ace has an employee stationed at the front door who greets you with a friendly, "What can I help you find today?"  He or she knows exactly where that obscure widget is located and directs you there where another employee gives you advice about the widget's use, correct installation, and recommends all the other things you need to complete your project.  Amazon can't do that.

Meantime, Walmart is cutting hours and planning a remodel wherein the jewelry department, a huge money maker for the store, will be cut half-in-two (that's Texan for half), and other departments will also be decimated so they can focus on delivering people's SpaghettiOs.  Meantime, Amazon had to bring me my 9 x 12 envelopes. That doesn't make sense to me.

And second - is this just a way to further isolate people?

We live in a time where the driving forces of politics has created division and separation like never before. The "other side" is demonized - in many cases rightly so.

Add to that "smart" phones and computers and our human contact is becoming a thing of the past.

People who are isolated from their neighbors are easier to control and control of the masses is high on the list of many who hold power in today's world.

What are you thoughts on this push for grocery delivery?


Amazon deals on Dremel Tools and Accessories.  I love my cordless Dremel and use it for many projects.