and flaps her hands around at a rate fast enough to change the climactic atmosphere of the room.

Women who flap their hands around, make claws of their fingers, and slash at the air are not to be trusted.

When asked early on if she had tried using the exchange website her answer was that she had, but had only gone so far because "she had affordable health care."  The arrogance of this statement when the Washington elites were essentially granted a carve out and we, you and me, are paying for their health insurance is galling.

While listening to Sebelius speak at this dog and pony show, I popped over to American Thinker and read  Obama and the Willful Blindness of the Conservative Beltway Intelligentsia focused on Charles Krauthammer and referring back to an interview he gave last Friday.

The article questions how someone with such a "towering intellect" could fail so miserably to understand who Obama was and what he believed in.

First, we have to accept the premise that Krauthammer is a "towering intellect."  Really?  I never found him to be exceptionally bright.  Nor do I consider the talking head harrumphers on Sunday morning shows particularly smart either.

You see, smart people take a bunch of information, process it, and come up with correct conclusions.  It's sort of like 2 + 2 = 4.  How the hell hard is that??

I'll tell you who the real intellectuals are.  It's you, dear reader.  It's the Fuzzy Slippers, the Maggie's, the Odie's, the AOW's, the Proof's, Asylum Watch, Conservative Hideout, and Trevor Loudon.

It's the Conservative Treehouses, who did such a great job on the Trayvon Martin case, Diogenes, who always cuts through the crap and get's to the point, it's Matt Walsh, Randy,  Freedom's Lighthouse, iOwnTheWorld, and MOTUS, who has mastered the art of speaking truth with humor - and on and on.  (Forgive me if you were not mentioned.)

These people take information, process it, and come up with correct conclusions.  It's as simple as that.

I'm headed out to purchase a leaf blower because my towering intellect has informed me that blowing leaves around is way easier than sweeping them up.  Simple?  You betcha!

Time for my favorite kitteh: 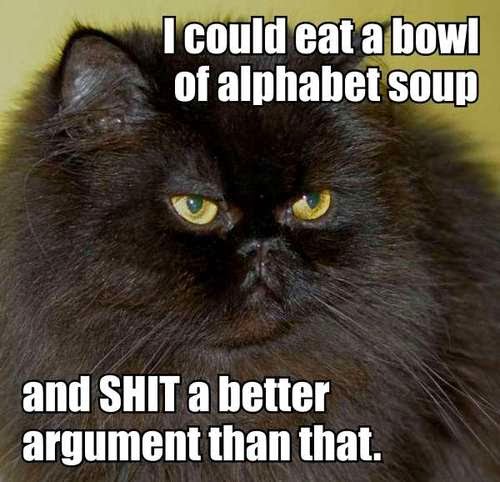