which she hasn't read.

But, it's okay since much of her article at American Thinker was based on a review done by Ron Radosh, a self-described ex-Marxist, who also hasn't read the book.  There were quotes from some other elitist historians - none of whom read the book.

Feldman praises David Horowitz, head of Freedom Center which publishes Frontpage Magazine, for removing a favorable review of the book and replacing with the scathing one whipped up by Radosh, who, to remind you, has not read the book.

Now Mr. Radosh has doubled down and spewed even more vitriol on Diane West in yet another article at AT.

What did West do to upset these self-described intellectual giants?  I think she suggested in her book that there may have been some conspiracies when it came to dealing with the Soviet Union way back when. That maybe, just maybe, there may have been a Soviet agent or two (or many) lurking around in our government. That's all I'll say about the book since I haven't read it either. To people like Horowitz, Feldman, and Radosh, hearing the "c" word is like throwing bloody raw meat to a pack of starving hyenas.

And these aforementioned self-described credentialed snobs don't think West is intellectually up to the task.  I love the comment quoted in the Feldman article attributed to Clare Spark, a blogger and historian:


"I have looked up Diana West's background. She has a B.A. in English from Yale and a prior book that gave her synoptic view of American culture as stuck in adolescent rebellion. That she has the confidence to make grand pronouncements about American culture and then diplomatic history can be attributed both to her Ivy League education and to the rise of the amateur commentator, thanks to far right conspiracy theorists. They are attached to her as to other 'inside dopesters," and the results are frightening for the future of the republic."

It just doesn't get much snottier than that, now does it?

You see, the bottom line here is that Feldman, Horowitz, and Radosh think they're doing a public service by recommending we don't read West's book because we're way too stupid to assess and critique on our own anything beyond an Archie comic book.


I'm starting to think this whole brohaha was whipped up to increase sales of American Betrayal.  My copy is on the way.

Conspiracy is Not a Bad Word... 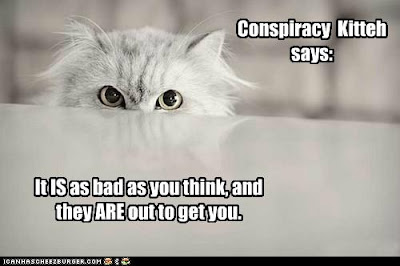