Obama really doubled down with this meal: 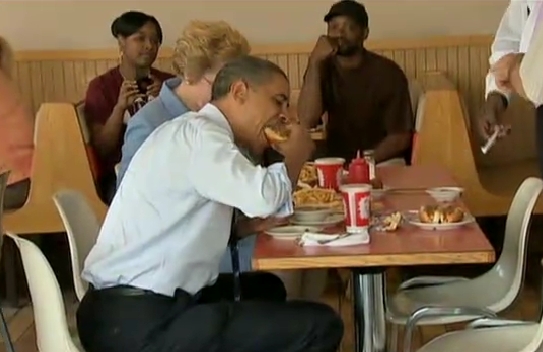 This was just days after Moochelle unveiled her new two million dollar USDA pie chart telling the "little people" how they should eat. And on that very same day, the Mooch was having some photo ops taken in her little organic garden.  Hopefully, the White House gardeners have solved the lead contamination problem.

Remember everyone being upset over Sarah Palin eating pizza with fork and knife?  Allow me to explain why she did this.  Sarah Palin, as any savvy person in the media spotlight would tell you, knows there are cameras on her all the time, just as there are on the president and first woman. Imagine, if you can, a picture of Jackie Kennedy or Laura Bush shoving pizza in their face while getting sauce under their nails, and probably dribbling on their lady parts.  Can't, can you?

The Won, in an attempt to be "one of the little people", not only shifts into his "shuck and jive" routine when ordering the above referenced meal, but proceeds to sit down and cram this food into his gaping mouth, looking a bit like a carp on a feeding frenzy.

This president and first woman, in their arrogance, do not seem to mind the plethora of unsightly pictures dispensed on a daily basis showing them shoving food (usually unhealthy and/or expensive beyond a "little person's wildest dreams), and looking worse than unkempt.  The first woman lives in the narcissist's dream world where she reigns as a "style icon", when the truth is closer to a Diana Ross redux.

Ugly expressions, slouching posture, and ugly gestures, are no strangers to these two.  Pointing fingers, scowls, and mugging for the camera, are the usual fare offered up by the two people that are supposed to represent the most powerful nation on earth.

Sarah Palin is too smart to have her image forever frozen looking like a slob, mainly because she's not a slob.  Sarah Palin acts like a lady.  It's something our first woman should try.

H/T Weasel Zippers where you can view the video of Obama ordering his "healthy" meal - if you can stomach it...

A carp feeding frenzy...I love it!

Your blog titles like this one always crack me up! LOL!

The guy in the back...wonder what he's thinking?

"gee wish I could afford all that food."

"To think, I could be home watching the game."

Honestly, I can stand neither sight nor sound of the SIC anymore. Or the "style icon" from the 'hood.

Hilarious, he really is a scummy slob. Too bad he didn't choke on all that crap!

Let's send them to Germany for a nice lunch of cuke's, tomatoes and lettuce ;-)

Just another "do as I say, not as I do"; what hypocrites!

Flyover - well that pretty well sums up my feelings, too

Bunni - a perfect salad offering for them...

He's eating a weiner to celebrate Weiner's photo shot. I'm sorry but I can't explain the fries and chili unless it's an MO thing.

Odie - oh sheez - I should have realized that. Personally, I would have skipped the chili and doubled up on the fries. One weenie at a time is fine with me...

The meal sounds great. Where can I get one.

We always have to remember that in the nanny state. They nannies are exempt from their rules. We the sheeple? We have to follow the rules.

Matt - it makes me hungry for a bacon wrapped weenie...

Remember, the key to understanding Liberals is the old maxim "do as I say, not as I do." After all, they are morally superior the rest of us, so they can issue rules and suggestions for us to obey, while allowing themselves a lax construction of those same rules, so they can enjoy diversions from the onerous burdens of leading us into an enlightened, high-fiber, low-fat utopia.

Everyone is equal, some are just more equal than others.

Everything is better with Bacon...except our POTUS.