arguing with the hypnotized is a waste of time.

The concept of "mass formation" has been popping up in many places. It was a new term to me, and so far I can't really tell if it's been around awhile or recently invented.

It seems to trace back to Professor Mattias Desmet, a Belgian professor of clinical psychology at Ghent University who also holds a masters degree in statistics.

It is, in my opinion, a way of totalitarian control through fear and manipulation of the masses. Due to our rapid communication it has spread world-wide.

The phenomena creates people who are clinically hypnotized. It backs up the phrase, "I tried to tell someone the truth, but they couldn't hear me." If they're hypnotized, they literally can't hear you. Continuing to hammer these people with facts is a waste of your time.
Want to know who backs this up?  Of course you do. How about the paper COVID-19 and the Political Economy of Mass Hysteria brought to you by The National Center for Biotechnology Information (NCBI) which is part of the United States National Library of Medicine (NLM), a branch of the National Institutes of Health (NIH) - a government agency.
Professor Desmet in his own words from an interview with Reiner Fuellmich:

Taken from a Christian perspective, it sounds to me like a lot of people who have no faith in God are the ones falling victim to this mass psychosis.

There's a short (5:47) video at Ban/ned Video of his explaining what it is, how we got here, and what to do about it.

Being a statistician, he throws out some percentages which may or may not be correct.  But we can run with them for now.  If his statistics apply to the entire world, they seem plausible. But taken region by region, they might be off.

I don't see 40% of the peeps in North Idaho capitulating to the crowd mentality. Since the MSM has started pushing the scarient, I have noticed a few more filthy rags covering the faces on the fat and old at Wallyworld, but it's still a very low number. I don't bother saying anything to these people because they are clearly hypnotized.
The Solution
A belief in God, the Father, Son, and Holy Spirit, and great courage is required of the 30% who continue to stand against the madness.
Notice belief comes before courage, but that belief will give you courage. There is a reason Jesus said, "I am the way, and the truth, and the life: no one cometh unto the Father, but by me." John 14:6
Professor Desmet said:
Dissent must become one and grow!
Ann Barnhardt recently had a repost of an article she posted back in 2010 on courage, which may help you.  In true Barnhardt manner, she storms in and smacks the reader upside the head. It's what I like about her (but, I'm nuts, so there's that.)
Mike Adams posted Your dominant DELUSION determines how you experience “reality” and how it all ends for you which essentially backs up the concept of mass formation.
The Night Wind is clearly fed up with this phenomena. Do read THE DIRECTION OF THE MAJORITY for more courage inducing information.
And, in another great minds moment, I popped over to Bunkerville to find this article by Mustang, Why do people give up their freedoms? The land of Lemmings, Desmet’s Mass hypnosis and Mass Formation? The comment I left over there:

Snort! I'm working away on a post about mass formation, I pop over here to see what Bunk is up to, and find this.  Your article is waaaaay more intelligent and deep compared to my puny effort. Linked.

And the brilliant Silverfiddle over at Always on Watch, posted Cult of Covid: Mass Formation, with a host of great links to additional information.
And finally, stolen from my good friend Odie, over at the Woodsterman (a fellow lover of premium gin), is this prescient meme: 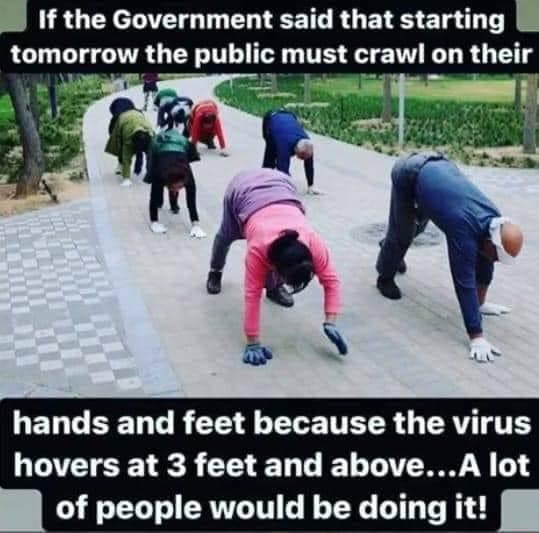