for being a commie/libtard dick.

The only reason I pay any attention to Minneapolis is because I was born and raised in St. Paul and lived in Minneapolis for a few years when I moved back there in my early 30's (a very big mistake!) I escaped a second time and never plan to step foot in Minnesota again.

So how did the foppish fey mayor put Minneapolis in the news?  Forget about Muslim diversity hire cops gunning down citizens.  He's after Donald Trump and trying his darnedest to keep him from having a rally there on Thursday. 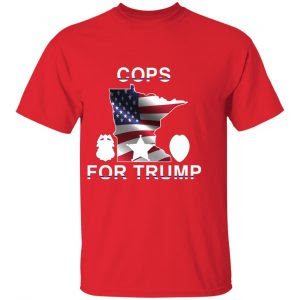 Mayor Jacob Frey has stated that Trump and his "hateful" ways are not welcome in Minneapolis.  Yeah - right!  Aren't you the mayor for all the people of Minneapolis or only the commie/libtards?

Not only is he trying to extort over 500K dollars for security from the Trump campaign, but he has forbidden the Minneapolis police from wearing their uniforms while working the event.

The cops are not too pleased with that brand spanking new rule that just happened to be put forth before Trump's rally.  Hmmmmm...

So, clever dudes that they are, a Cops for Trump T-shirt was designed and is being sold with proceeds going to charities of their choice.

Lieutenant Kroll from the police union tells us about it:


I might mention something else that bothers me (just a teeny bit since the machinations of the commies are so predictable), buuuuuut, did you know that some people compare Trump rallies to Nazi/Hitler rallies?  I've watched almost every single one of Trump's rallies and witnessed cheerful, polite people of every persuasion having a wonderful time. If there's any craziness, it's perpetrated by commie troll protesters.

I'm looking forward to Trump's Thursday rally in Minneapolis and pray for his safety.