this is what I predicted.

I have numerous friends on Facecrap that spend more time in "jail" than they do posting updates.

Since the only thing I post on Facecrap is links to my blog posts it's a wonder I haven't been slammed into jail. I do know that I've been shadow banned, both by Google and Facecrap. 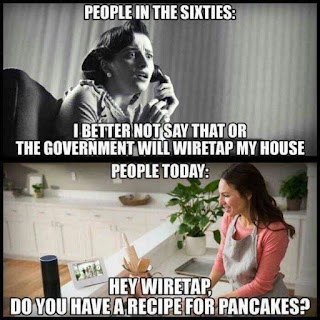 As for Alexa and other devices like that, my personal opinion is someone would have to be certifiable to put one in their home.  Good grief, they even have a "cute" ad on the radio where I guess Siri and Alexa get in a cat fight and one or the other says, "I'm always listening."  They just told you what they're doing up front and in your face.

I know that when I shop on Amazon the whole world can make certain assumptions about who I am and what I do.  I even had to think long and hard about entering my daily food on MyFitnessPal. Do I really need a huge corporation knowing what I eat and drink? My blog posts are shadow banned so the elitist commie/libtards are well aware I'm a deplorable, homophobic, right wing religious fanatic dirt person.  And don't forget I'm also a Nazi now.

Lest you think I'm just some old crank spewing conspiracy theories, in my dim and dark past I lived in a situation where my phone was tapped.  I know what our government is capable of doing.  I've now reached the age of really not caring, but I'm still very cautious about certain information.

If you're a young person excreting huge wads of your personal info online - stop it now! As Rush would say, "Trust me on this."

Paul Joseph Watson nails it - and we thank him!