What the heck are those two huge birds out back?...

I tried to get a pic, but they were too far away for my puny little camera.

I thought it may be a wild turkey, but it was a weird (but beautiful) beige color.

It's time's like this I always say, "Google is your friend."

Turns out it's a smoke-phase turkey.  Not one, but two.  What are the odds of that happening? 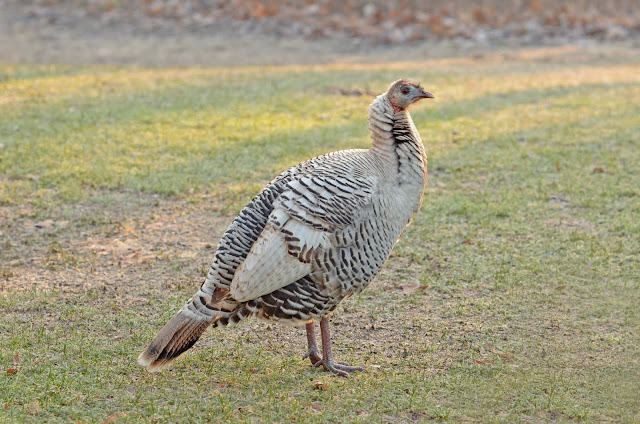 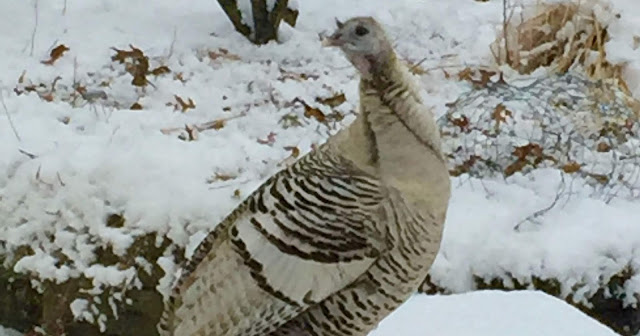 Excerpt from an article posted in New Jersey, but the Spokesman Review says they've been spotted around here.  What I find really odd is that there's two of them.


[...]First of all, McBride explained, (supervising biologist for the state Department of Environmental Protection's Division of Fish and Wildlife) the bird was not a hybrid of two different types of turkeys. The unusual plumage, also known as a “smokey phase” or “smokey gray phase,” was caused by a recessive gene.
“If two eastern wild turkeys that have normal coloration also both have that recessive gene, some of their offspring may have the smokey form — like albinism,” he said.
Although the bird that Ken saw looked nicely camouflaged against that recent snowfall, McBride said the bird’s feathers did not change color in winter.
[...]“They’re quite handsome up-close,” he adds. “They do have little bit of brown, a little bit of grayish color, and you can see the shadow of all the typical turkey coloration.”
They’re also very rare. “We’ll get reports of them maybe once or twice a year,” McBride says. “We really can’t measure how common they are because they’re seen so rarely, but they’re definitely much less than one percent of our wild turkey population, which is between 20,000 and 25,000.”