Commie/Marxist/Libtards to the Deplorables™: "I reject your facts"...

the fact is Nancy Pelosi actually said this.

However, it's my supposition that it's the major thinking of the majority of the left. A supposition is not a fact - it's a guess, notion, suspicion, or a hunch.  But, if the left can pick and choose what they wish to believe as a fact, I suppose we can too.

Look at any meme a commie/marxist/libtard posts on Facecrap.  It's never based on facts or, God forbid, truth. As a matter of fact it's usually a complete lie.

Viewing their constant display of stupidity, my supposition is they're venal lying virtual signalling arrogant ignorant idiots and should be mocked at every turn.

A good start would be rejecting the constant urge to post on every stupid nugget that dribbles from the pie-hole of Empty Cortex. 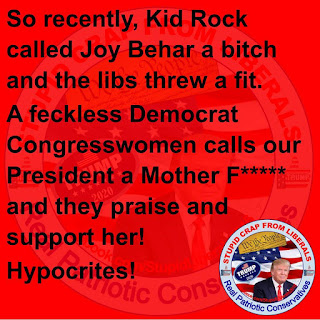 Tomorrow, Donald Trump, president of the United States will address the nation from the Oval Office before traveling later in the week to the U.S.-Mexico border.  He will present the citizens of this country with facts.  And he'll do it without calling anyone a motherf*cker.

Be ready to listen to the commie/marxist/libtards shout, "Racist."

American Thinker:  Mounting indications that a Civil War 2.0 may be close at hand  what do you think?

Don Surber: Trump's success is bigger than a wall  excellent!

Save 25% on Grass Fed Collagen Peptides