Feeling a rant coming on...

until I read the Epistle for today.

It is my habit on Sunday to study the readings for today's Mass before attending.  We have all experienced a most horrific week in the history of our great country.  We are understandably angry and at the same time sad.

To witness grown men and women act in such a despicable manner was shocking to many of us.  Forcing a man of integrity to discuss his virginity and explain jokes about flatulence from his high school years was a moment of sheer lunacy.

As my anger was bubbling toward the boiling point I read today's epistle and decided tomorrow was soon enough for a rant.

Our epistle for today is taken from the letters of Paul to the Ephesians, Chapter 4, verses 23 through 28. I have included some verses that come before and after since I think they add to the understanding of what Paul is trying to convey.

17 So I declare and testify in the Lord that you must no longer live as the Gentiles do, in the futility of their minds;
18 darkened in understanding, alienated from the life of God because of their ignorance, because of their hardness of heart,
19 they have become callous and have handed themselves over to licentiousness for the practice of every kind of impurity to excess.
20 That is not how you learned Christ,
21 assuming that you have heard of him and were taught in him, as truth is in Jesus,
22 that you should put away the old self of your former way of life, corrupted through deceitful desires,


23 Brethren, be renewed in the spirit of your minds,

24 and put on the new self, created in God’s way in righteousness and holiness of truth.

25 Therefore, putting away falsehood, speak the truth, each one to his neighbor, for we are members one of another.

26 Be angry but do not sin; do not let the sun set on your anger,

27 and do not leave room for the devil.

28 The thief must no longer steal, but rather labor, doing honest work with his [own] hands, so that he may have something to share with one in need.

29 No foul language should come out of your mouths, but only such as is good for needed edification, that it may impart grace to those who hear.
30 And do not grieve the holy Spirit of God, with which you were sealed for the day of redemption.
31 All bitterness, fury, anger, shouting, and reviling must be removed from you, along with all malice.
32 [And] be kind to one another, compassionate, forgiving one another as God has forgiven you in Christ.

I'm always amazed when I hear people refer to themselves  as "recovering Catholics."  Their number one complaint is usually being saddled with Catholic "guilt."  Really?  Guilt is good.  When you do something wrong you should feel guilty and that guilt should make you ashamed and push you toward repentance. May I remind you "recovering Catholics" that psychopaths don't feel guilt or shame. 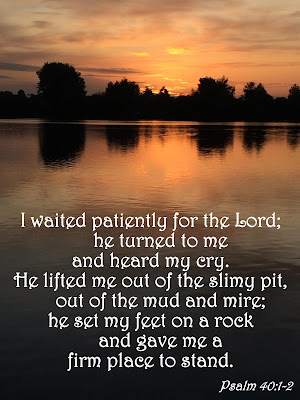 Mrs. Brett (Ashley) Kavanaugh has asked her Christian brothers and sisters to pray Psalm 40 over her husband, their family, and the nation.

Our retired pastor and next door neighbor, Father Bill, is in hospice care after suffering a major stroke last Saturday.  In your charity please include him in your prayers.  Thank you