It's a wonderful Monday - the commie/marxist/libtards have melted into puddles...

time to get it together.

In case you were wondering how much crazier the left could become, check out what Brian Stetler of CNN Fake News has to say: 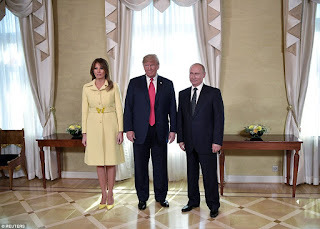 President Trump was set to meet with Russian President Vladimir Putin on Monday, and the liberal media were in full campaign mode as they pushed speculation the President was a Russian agent meeting with his handler.

CNN’s Brian Stelter admitted as much during Sunday’s Reliable Sources, saying, “Trump opponents will speculate that he's really a Russian agent, having a meeting with his handler, betraying America.” While he did say that, Stelter also declared that no one could trust the President’s account of the meeting and gave those conspiracy theories room to grow.

...“What President Trump says is so frequently false or nonsensical that his words don’t have the same meaning, the same power, the same impact as past presidents. It’s a shame, but it’s true. Trump simply cannot be trusted. He has proven this himself time and time again. It’s his own lies and his own contradictions that have proven it.”

Do read the rest - it's deliciously insane.

Hmmm - here's a statement that invokes a lot of trust when dealing with Russia... “This is my last election … After my election I have more flexibility,” Bath House Barry Hussein.

I've been wondering why I feel a certain lack of interest in the goings on.  I also think that others are feeling the same way.

It occurred to me while mulling this over that we've come to understand Trump is doing his job leaving us free to do our jobs.

It also leaves us free to laugh at the commie/marxist/libtards who have clearly lost their minds.

As much as I have to do today, I will take time to watch the live stream of the press conference with Trump and Putin.  Then I will get on with my day while Trump gets on with his. Thank you, President Trump. 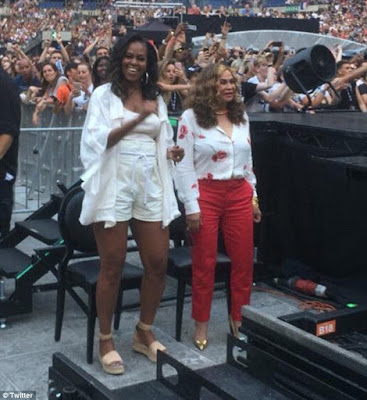 Speaking of making fun.  Have you seen the left's icon of beauty and fashion, Michelle Obama, wiggling her way through a Beyonce concert in Paris?

Daily Mail has the vid.  Warning: What is seen cannot be unseen.

Geller Report:  Trump Quadruples Down on ‘Sad’ Impact of Mass Migration on Euro Cities Like London and Paris, Praises Hungary

The Night Wind:  ANOTHER REASON NOT TO TRUST THE MSM

Today is Prime Day at Amazon

Check out all the great deals:

Remember - every purchase you make at Amazon through my links earns me a small commission  - at no additional cost to you, and you'll be helping to pay for the extra $2 K my cataract surgery cost.  Thank you.

Some of my personal favorites:
Posted by Adrienne at 8:30 AM