Way to go Minneapolis. Now the whole world knows what a liberal hell hole you are...

my condolences to the conservatives who happen to live in the Twin Cities.  You are vastly outnumbered.

Back in July a Minneapolis Somali-muslim rookie cop (undoubtedly a diversity hire) gunned down and killed a white Australian woman, Justine Damond, who had called the police to report a possible crime in progress.

Today on TwinCity(dot)com, a publication of the St. Paul Pioneer Press, they ran an article stating that a small remembrance placed in front of a police precinct by a "hate group", Identity Evropa, was speedily removed.

Wandering over to Daily Mail what should I encounter but a huge article about the same issue calling the group a "white nationalist group" as well as a "hate group."

If I'm not mistaken, this is the same precinct where Black Lives Matter were allowed to camp out in protest for 18 days over the shooting of a black man in 2015 and costing the department an estimated 900 thousand dollars in overtime pay - but that's okay. 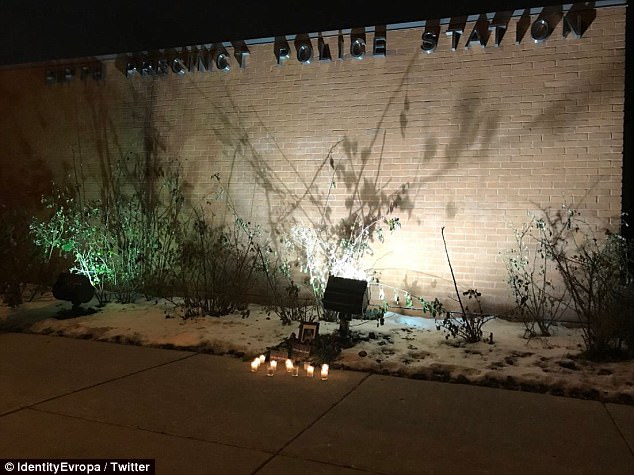 The mayor-elect of Minneapolis, Jacob Frey, chimed in:


"I condemn the perpetrators and their tactics in the strongest possible terms.  Identity Evropa and those who share their values have no place in our city. Hate has no place in Minneapolis. Period."

And what exactly are the values of Identity Evropa?

Thank you for asking.

In the interest of knowledge, I went to their website and read just about every single thing there and discovered that this "hate group" has as its primary goal the preservation of European traditions and identity.  And that my dear friends makes them a "hate group."

While there I followed a link to a video on the subject of cultural Marxism on YouTube.  I'd post it here except YouTube has blocked it from being embedded and gives this warning before watching it:  The following content has been identified by the YouTube community as inappropriate or offensive to some audiences.

There is nothing offensive or inappropriate about this video, other then being 100% true, and I suggest you watch it.  The Youtube warning should send chills down your spine because what it's really saying is they find white people, Christians, and Jews to be offensive.

While I support the basic premise of Identity Evropa (it's okay to be white and European) their tactics and some of the people involved are not high on my list.   Doing further research it appears they are trying to change their image from being "alt-right" to something  more user friendly.  Good luck with that /sarc.

Anyway, I've always found marching around and waving signs to be a pointless exercise in futility - but that's just me.

Now that we have the "hate group" out of the way, lets go back to Minneapolis where the news is so heavily biased or simply not reported that the entire community lives in a libtard vacuum.

The prosecutor in Minneapolis is probably not going to bring charges against the muslim cop.  Why?

"I have to prove beyond a reasonable doubt, that the moment he shot the gun, he feared for his life. And he used force because he thought he was gonna be killed," Freeman said. But I can't. He won't answer my questions because he doesn't have to, OK?"

Freeman later apologized to investigators and said his comments were ill-advised.

Ill-advised?  How about just plain stupid?  Last I checked it was the defense attorney's job to prove the innocence of a defendant, not the prosecutor.

In Minneapolis, and other libtard cities, Black Lives Matter and any other left-wing group are hailed as modern day civil rights groups.  Never do you see the word "hate" attached to them. And that is exactly what cultural Marxism is all about.

If you are white, Christian, Jew, or support your country you are automatically branded a hater.  Check out the loons putting a frame on their Facecrap pictures saying "We will not let hate win" for some of us daring to suggest that illegal immigration is a problem.

Many people have been predicting a backlash to all this anti-white hysteria. If reading the comments at both Daily Mail and TwinCities(dot)com are any indication it's well underway since they're running about thousand to one (counting the "likes" on DM) in favor of the memorial and decrying the cover-up of the shooting by the Minneapolis police, the mayor, and the governor of Minnesota.

People are fed up and not going to take it anymore.

So, good work Minneapolis.  You'd be wise to read those comments and correct this FUBAR situation post haste.

And a small note to the residents of Minneapolis:  If you think your former mayor, Betsy Hodges, was bad just wait until the new mayor gets rolling.  He's going to make Bike Lane Betsy look like a stroll in Minnehaha Park on a sunny autumn day.  Proof positive that libtards never learn.