Did Paul Ryan just get played by the Dems?...

it would appear so.

This is what happens when you draw your public conclusions by sticking your wet finger in the air.

Nancy Pelosi and the mayor of Berkeley, Jesse Arreguin, have denounced Antifa:

House Minority Leader Nancy Pelosi, D-Calif., says the "violent" members of Antifa — those members of the anti-fascist group who allegedly attacked conservative demonstrators over the weekend in Berkeley, Calif. — should be arrested and prosecuted.

"Our democracy has no room for inciting violence or endangering the public, no matter the ideology of those who commit such acts," Pelosi said in a statement Wednesday, the San Francisco Chronicle reported. "The violent actions of people calling themselves Antifa in Berkeley this weekend deserve unequivocal condemnation. source


While it's a lie that Paul Ryan supported Antifa with a quote attributed to him that was proven to be fake news, he was a bit late on denouncing the tactics of Antifa as being loathsome. 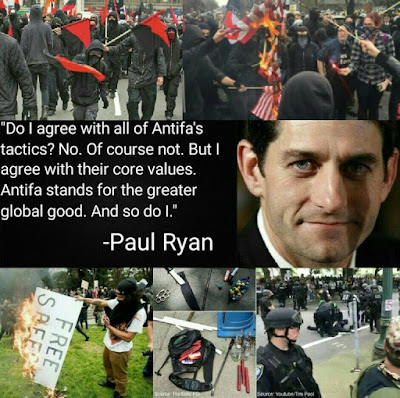 Unfortunately, this cements in the minds of people that Paul Ryan is a quisling.  Because in today's world fake news rapidly becomes the "truth."