I love our police department and also the Kootenai County Sheriffs.  They are exceptional.

This area is home to quite a few yellow bellied marmots.  They used to dart in and out of the rocks surrounding the parking lot of the original Costco in Spokane where I worked.  People here love them because they're so friendly.  Just imagine a large (20 lb) friendly squirrel begging for food and you've met a marmot.

A standoff, tense negotiations and a forced extraction of a stubborn suspect. It's just another night on the graveyard shift for officers with the Post Falls Police Department.

"Officers responded to Walmart when a customer was unable to get her car to start. She opened her hood and found a rather large Marmot trapped in the engine compartment. With the assistance of a kind citizen and a handy tow truck operator from Recovery Masters the Officers worked tirelessly to remove the animal’s fur from the fan belt. 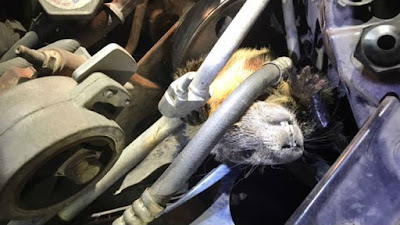 Once Unstuck Chuck was free Officers began the tedious task of negotiation with the furry stowaway. Chuck was very reluctant to leave his new found feast of electrical wires. When attempts to talk him down failed the Officers and helpers turned to their tools and used multiple methods of extraction.

Finally, Chuck gave up and fled the Dodge Neon. While congratulatory back patting was taking place Chuck returned to his life of crime and found another vehicle to unlawfully enter. Once again, Officers tried to reason with the rodent who now seemed tired and perhaps a little stressed out.

Begrudgingly, he quickly gave up and was captured. Officers quickly took him into custody and left the area before Chuck could re-offend.

We are happy to announce that Chuck was granted a full pardon and was released back into his natural habitat. He has been trespassed from Walmart."

Great Deals in Patio, Lawn, and Garden (including some great BBQ deals)

Chez Adrienne is given a tiny commission when you purchase anything through one of our links - at no additional cost to you.  We thank you in advance.