So..........I've been driving for approximately 56 years and have never experienced a sun visor flopping down like a wet noodle - until two days ago. At first it only flopped half way meaning that if I stopped suddenly there was a distinct possibility of it shearing off the top third of my skull.  Eventually it just hung there limply obstructing vision and annoying the hell out of me.

I did the usual poking around trying to figure out the problem to no avail. Next up?  Due diligence, which means I Googled the problem. Lo and behold, I was not alone.  Seems like a simple thing like a sun visor staying in an upright and locked position, something that auto manufactures figured out many decades ago, now no longer work properly for the life of the vehicle. It's not just my vehicle (Hyundai Sonata), but many other makes and models have the same problem.  I did run into a parts supplier who said the 2006-2008 Sonata had a defective sun visor and would sell you the new and improved one for $49.95.  Nope.  Not spending $49.95. 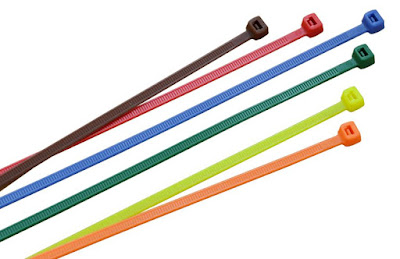 After perusing the YouTube vids on various fixes ranging from Velcro, tape, and other more exotic fixes, I settled on the zip tie fix.  I already owned a humongous container of zip ties purchased years and years ago at Costco so I figured I'd start there.

The young man in the video ended up using three zip ties.  My one seems to do the job, but I'm keeping some extras in the car in case of a future floppy emergency.

So here's the video that led to my fix: