let's send out our thoughts and prayers, wring our hands while tears trickle down our pale and sunken cheeks, light a candle, fling about some flowers, and ponder the motives of the muslim bomber.

The white Europeans have been sold out by the people they elected - and so have we.

Your political leaders, and the SJW's who roam among us, welcomed these heathens into the countries of Europe, Scandinavia, and the good ol' U.S.A.  This was not some random occurrence.  This was a planned invasion.  The elitists hide behind their security forces, high walls, and live a privileged life while espousing love and concern for people who blow little children into pieces that require a mop for clean up.

We heaped untold billions of dollars of aid into their outstretched hands.  We allowed them to build mosques where future terrorists are trained.  We declared we all worshiped the same God.

A commenter at Huff and Puff actually said that it's all our fault for not being nicer to muslims.  Got that?  It's our fault.  All we have to do is quit being so racist and mean and the muslim hoards will be happy and attacks will stop over night. 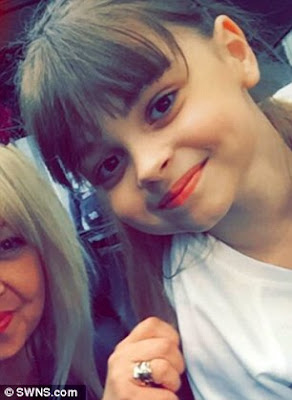 The MSM has already picked it's poster child for manipulating and twisting your heart strings.  Little Saffie Rose Roussos has her precious little face plastered front page on the very sites who worry about muslims being unfairly picked on.

The muslim hoards have no intention of assimilating.  If they are here, or in any European country, it's time to send them home.

Email ThisBlogThis!Share to TwitterShare to FacebookShare to Pinterest
Labels: Manchester