Members of the religion of peace kill innocent people in London...

and liberals can't wait to import more of these violent, inbred, disease ridden, sand fleas to infest your city.

Conservatives who are still trying to remain calm and tolerant need to wake the hell up and realize that libtards are the enemy.  They hate you and want to punish you for being a "bitter clinger."  Surrounded by walls in their gated communities and followed around by armed guards, they call you names for wanting to be safe

Today people in London who were simply trying to get on with their lives ended up being mowed down by a crazy person in a vehicle turned killing machine.  A police officer was stabbed and killed just a few feet from Parliament. 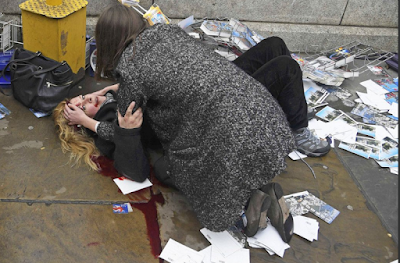 This woman, who was trying to earn a living selling post cards on the Westminster Bridge, lies bleeding in critical condition after a Muslim drove into her at high speed.

Typical comments from the UK at Daily Mail says it all:


Beaumont Livingston, Compton, United Kingdom, 29 minutes ago
I am fuming listening to our 'heroic' MPs, how vulnerable they felt? Welcome to our world, we are out there in the streets open to this threat every day, our MPs keep letting them in, protecting their human rights and now only just feel threatened, welcome to the man and woman in the streets sense of vulnerability.

clivemonk1, St Albans, 31 minutes ago
We all knew this was going to happen we have left ourselves hopelessly exposed it's all too late now and it's innocent people who loose their lives not the incompetent politicians and people condemn Donald Trump for trying to protect his country welcome to the modern world God help us.

The Muslim mayor of London, Sadiq Khan, has nonchalantly said terror attacks were just a given when you lived in a large city and we should just accept it as the new normal.  The operative words are "Muslim mayor".  There are now so many sand fleas in London they were able to elect one of their own as mayor.

What are you going to do when you wake up one day and your new mayor is a Muslim who suggests you just "get used" to terror attacks?

And don't, for the love of God, tell me about the lovely Muslim lady you work with who wouldn't hurt a fly, because I may lose it and smack you upside the head.

This happening to innocent everyday sorts of people makes my rage erupt into a  volcano shooting me into stroke territory.

The main function of a government is to keep the citizen's safe.  Instead, we have a federal government that has spent the past eight years arguing about where people should be allowed to pee or poo - that is, when they're not suing a citizen for not making flower arrangements for two sodomites who are having a mock wedding ceremony.

Lutheran and Catholic agencies are making a killing by accepting tax dollars - your tax dollars, to import these swine and dumping them in the center of cities where they suck up every social service dollar they can lay their rotten hands on.

For those of you who are in love with "diversity" you need to understand this is not diversity, it's an invasion that will only become the downfall of our country.

Email ThisBlogThis!Share to TwitterShare to FacebookShare to Pinterest
Labels: terrorism