and does it the right way.

I buy the majority of my art supplies online from Dick Blick and I've always been very pleased with the assortment, the prices, and the quick delivery.

So when I received an email from them today concerning the defunding of the National Endowment for the Arts by the Federal government my first reaction was, "Oh no, I hope this isn't going to be an "I hate Trump" missive.

Instead, this is what I received: 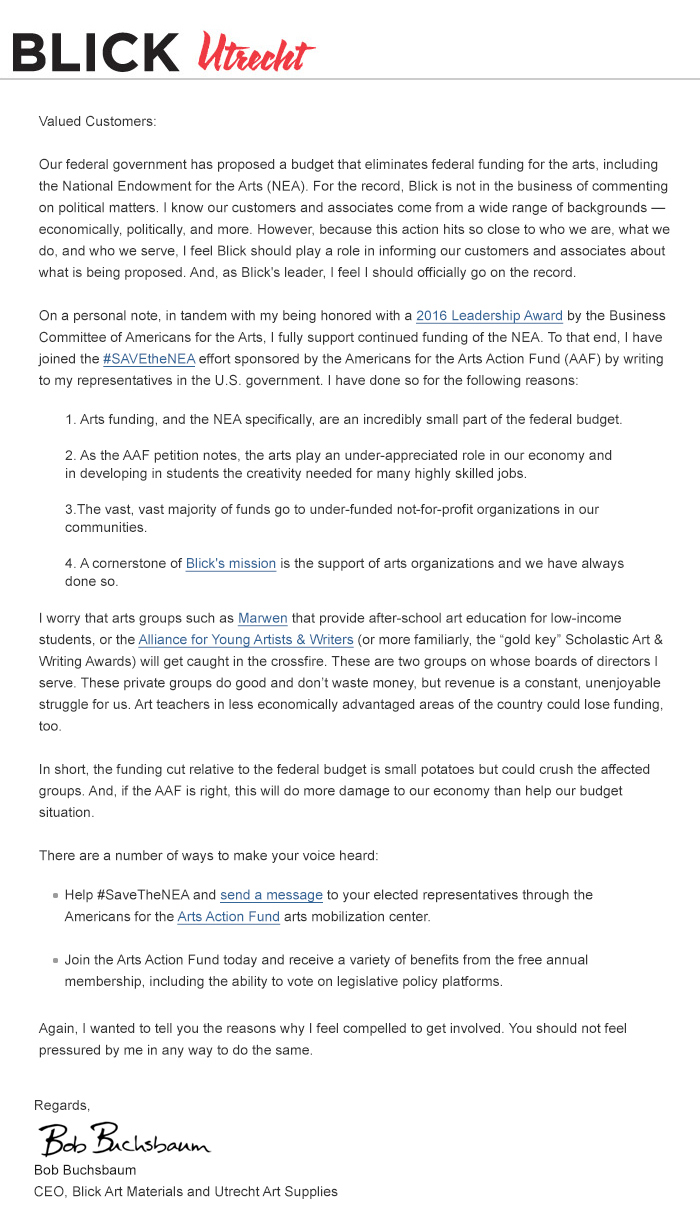 Ladies and gentlemen, this is how you advocate for a cause that means a lot to you without pissing off half of your customers.

I'm a firm believer in the government not funding the "arts".  It should be up to an individual state if they wish to use some of their block grant money for the arts, although that would not be something I would support.  The difference is if it is handled at the state level, those of us who oppose would have a chance of changing the minds of the budget makers.

There is absolutely no way the government can be involved in funding for the arts without politics and cronyism entering into the equation.  Most of the grants awarded by the NEA are for what I consider less than worthy of even being called "art."

I understand why Mr. Buchsbaum would be in favor of the funding and applaud his stating clearly why, while at the same time saying if you didn't agree with his position that was okay with him.

I also believe if Mr. Buchsbaum delved a bit more deeply into the corruption and waste in the NEA, he would quickly change his mind.  We can hope.

Still loving Prime.  I ordered some bath mats yesterday and my faithful mailman, Louis, handed them to me this morning.  How the heck do they do that?

National Review:  What’s the ‘Public Purpose’ of the National Endowment for the Arts?

Foundation for Economic Education:  The Pro-Art Case for Defunding the National Endowment for the Arts  (Excellent!)

Email ThisBlogThis!Share to TwitterShare to FacebookShare to Pinterest
Labels: Dick Blick, National Endowment for the Arts