FCC, Banning Bullets, Shutting Down the DHS, Discrimination, Being Prepared, and a bunch of other random stuff...

because my tabs are full.

FCC now has control of the internet.  And exactly what are we going to do about it?  Nothing.  We have become cowed slaves, and the Republicans are not our friends.

Isn't this exactly what was predicted by many people?  You can have all the guns you want, but you can't have any bullets.

In view of the two above items, you may want to read:


Shutting down the DHS

Let's all suppose the DHS gets shut down tomorrow.  Naturally, the Republicans will be blamed, and the libtards will howl.   Now let's suppose there is a terrorist attack; not that the DHS has managed to stop any so far.  I can hear it now, "The Republicans have blood on their hands."  U.S. Ambassador J. Christopher Stevens is unavailable for comment.

This is an issue that is certain to cause me to lapse into a red hot rage.  I have numerous tabs devoted to the latest homo-fascist attack against decent people who own private businesses, just trying to live their lives.


She’s soft-spoken, has 23 grandkids, professes love for the gay customer who tried to hire her for his wedding and helped him find another florist when she politely declined (it was Washington’s AG, not the customer, who filed the discrimination complaint against her), and stands to lose her business and possibly her home if the state keeps coming after her for this. There may be more sympathetic spokesmen for religious freedom out there but offhand I can’t imagine one. The polling on whether businesses should be required by law to cater to gay weddings is mixed, but I wonder how long that’ll last if the Stutzman case breaks big nationally.  read the rest

In Oregon, Sweet Cakes owners Aaron and Melissa Klein have already closed their private business and are being victimized by some angry lesbians for not making them a "wedding" cake.  source

FedEx, a public company, refuses to ship a legal gun making related item essentially putting a small business owner out of business.  How is that okay?

I believe that all discrimination laws are illegal and unnecessary when applied to a privately owned company.  A business should be allowed to decide who they want to serve.  Period.  If a restaurant owner decides he doesn't want to serve Chinese people, and hangs a sign in his front window barring them entrance, well, so be it.  Market forces will apply quickly to such an occurrence. Don't want to photograph a sham "wedding" between two people of the same sex for whatever reason?  You should not be forced to do so.

This is not a religious issue.  This is a human rights issue.

No one should be forced to serve another person.  I believe that's why we ended slavery.  I don't give a rip if it's about color, religion, or sexual proclivities.  End of rant.

What do the following have in common?
Knowing how smart my readers are, I'm sure you've guessed what binds these seemingly disparate items together.

If you're not prepared, you're screwed.  It's as simple as that.

Do you have some cash set aside in a safe place in case the terminals at stores or banks are shut down?  How about some water set aside if the power goes out?  Candles? A way to keep warm? Do you have enough food for a week in case of horrible winter weather?  Do you keep your car's gas tank full and some emergency supplies in the trunk like water and protein bars?  Do you have enough money set aside to pay your bills for six months if need be?

If you answered no to any of those questions, then you need to rethink your priorities.

I'm not trying to present an over-the-top scenario here or engage in scare tactics.  These are just examples of some everyday, and very real possibilities. 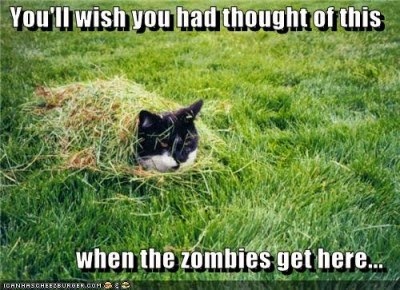