Bitter whining flaming racist, Michelle Obama, recounts the horror of being asked for help at a Target store... w/ Update

except it's a lie and she thinks we're so stupid we'll believe it.


Barack and Michelle Obama are sharing their own personal experiences with racial prejudice, saying they’ve been mistaken for valet drivers and Target employees — the latter even occurring during their time at the White House. 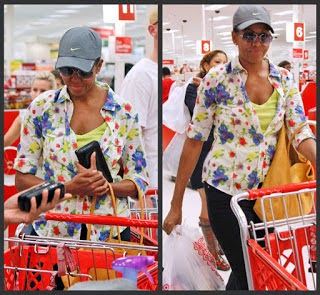 “The only person who came up to me in the [Target] store was a woman who asked me to help her take something off a shelf. Because she didn’t see me as the first lady, she saw me as someone who could help her,” Michelle Obama told People magazine, recalling a trip she made to Target, according to excerpts released Wednesday.

Well, excuuuuuse me!  Someone didn't recognize her in Target.  The horror!

First, they asked us to believe that she actually went to a Target because she needed some Febreze and not one of her 20 staff members was able to accommodate this necessity.

Then we are to believe that a hugely tall (and just hugely) person walking through Target with photographers snapping pictures and Secret Service people, no doubt dressed in everyday commoner clothes, surrounding her didn't elicit any response from the hoi polloi?

We are to believe that aforementioned hoi poloi thought someone dressed in an ugly flowered shirt, grey baseball cap, carrying an over-sized yellow purse, and pushing a Target cart was a store employee?

We are to believe that this someone was allowed to approach her and ask for help?

I don't think so, you worthless whining oh so picked upon person.  Even the hoi polloi are not that stupid.

As to the help?

I'm 5'2" tall and am forever hunting tall people to get stuff for me off the uppermost shelves.  The person asked is rarely an employee because there are usually very few around to help.

Not to be left out of the "we be picked on and disrespected 'cause we be darker than you", President Ribbon Cutter had this to say:


President Barack Obama shared that he has been mistaken for staff as well on numerous occasions during his life.

“There’s no black male my age, who’s a professional, who hasn’t come out of a restaurant and is waiting for their car and somebody didn’t hand them their car keys,” said the president.

The horrors mount up for these two arrogant race baiters.

We're tired of this constant barrage of  "woe is me" as you prepare for your 17 days in Hawaii.

via Truth Revolt and thanks to McNorman:

Listen to her describe the same incident on Letterman back in 2012.  Suddenly it's racism, when only a few years ago it was a cute incident.

Thing is - neither story is true.  You lie!