Forced Vaccination and Wishing you Dead?...

it will happen if Trump doesn't prevail.

Look around you at the masked-up people. They will become the army forcing you to comply.

Before I decided to kick Costco to the curb over their new mask and/or plastic shield policy, I followed a site called Costco Insider, who each month posted a copy of the Costco coupon book before it was officially released.

Every month, in spite of the vast majority of commenters complaining about having difficulty accessing the coupon book, I always thanked them for providing this at no cost.

This is a typical comment on the current December coupon book posting:

You people are the worst. Why do you make it so difficult to find the coupon book? I don't expect an answer.
It has 6 up votes and zero down votes. It seems that the tech challenged couldn't figure out they had to be on the actual post and not the main page.
Three days ago I left this message:

However, with the new Costco mask mandates I won't be shopping there anymore. I'm an ex-Costco employee (9+ years) and a supporter, but they've stepped over the line. No longer a member. Sad.

Notice I thanked them, didn't insult anyone, didn't tell anyone they were sheeple and a doofus for running around with a filthy mask on their face, and didn't even insult Costco. I simply said under the new rules I (me/personally) would not shop there anymore. I didn't suggest anyone else shouldn't shop there (boycott), I simply expressed my sadness at deciding to not shop there myself (me/personally.)
Well, slap my rear patoot and call me a biscuit, this is what ensued:

Don't let the door hit ya. It's obvious that you care about no one but yourself. I can see why you're an EX Costco employee.

Not just that but she's also a completely ignorant POS. The evidence is out there. The government learned the hard way and so did big business. These people are just embarrassing themselves. Much of it is racism, they REFUSE to admit Asia could ever one-up them on dealing with anything. By wearing masks, they feel that would be admitting Asians know more than them.

I won't bother to post the argument that erupted about racism over that comment where the participants soundly insulted each other. It was weird.

What is your argument for not wearing a mask?Why is that so difficult?

It's not difficult. She's an idiot, trailer trash basically. We're glad to be done with her.

WebTraveler to Adrienne • 2 days ago
Your conduct is ridiculous. Your mask protects other people. OTHER PEOPLE. That's me, and others. You are the reason that this thing is out of control.
You lack integrity in every sense of the word. Glad you are out. Go make your stupid stand.

Selfish person (I use person lightly), 245,000 dead americans and you won't wear a mask? You are the one that's stepped over the line.

Your minor freedom is not worth my life or the lives of those at risk.

Spawn Spawn to Adrienne • 2 days ago

Kill yourself, at least you'll be contributing to the world for once.

Summed up - I'm an idiot, lack integrity, trailer trash, a completely ignorant POS, racist (but, of course), I've stepped over the line, a non-person, I'm a Russian troll, and I care about no one but myself.  Finally, the coup de grâce - I should kill myself!

I'm not often shocked, but to see such vitriol coming from a bunch of people toward someone who they don't even know is appalling.

Even more disturbing is the long comment from an immigrant from the Caribbean in which he includes this: (bolding mine)

The one positive of all this is that the US has no choice but to take education seriously now. Especially science. They're, hopefully, going to SERIOUSLY fix the education system to ensure the next time there is a crisis that people are obedient to the government(NOT ALWAYS a bad thing like the US media like to make it out to be) and that people are educated enough to understand why they need to make sacrifices.

So, why the hell am I spending my morning telling you all this and why do I think it's important?

Soon, very soon, the globalist cabal, who desire power and control more than life itself, and a "reset" of how the world operates, will be cramming a vaccine down our throats.  This vaccine will contain gene altering ingredients (mRNA) and aborted fetal stem cells.  You want that pumped into your body for a bogus scam of a virus? 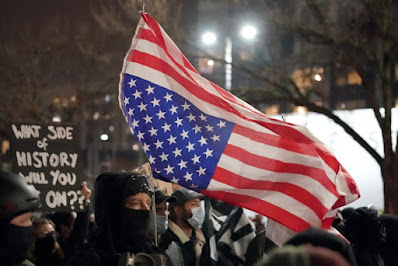 Notice the ramping up of the fear and how the government lackeys in many states are starting up with more lockdowns.  It's about control.

No Thanksgiving for you, and you might as well shit-can Christmas too. No church and no family gatherings until we have a vaccine.

Think about this.  How are they going to force you to have a vaccine?  Re-read those comments above and witness the reincarnation of the Brownshirts. These people are your neighbors and they wish you dead. Do you really think they'll have any problem turning you in to the vaccine police?  Hell, they could even burn down your house or shoot you on sight because they have been possessed by some sort of demonic influence.

These people are dangerous.  We just witnessed the flotsam of the world attacking happy Trump supporters having a Maga Rally in DC. We also witnessed almost no help from the local police. Do you really think the commie/libtards would hesitate to harm you if you don't partake of the vaccine stew?

As the government continues to contract your exterior world, making it smaller and smaller, now is the time to expand your interior world.  Far from feeling hopeless (the sin of despair), now is the time to realize that we are in a war against the forces of Satan, and he hates it when you call on God.  It makes him writhe in agony and re-double his efforts to shove you into despondency, distress, and desperation. If you allow that, the demons win.

The demons don't come to you with horns and forked tails. They come to you wrapped in a pretty package of false compassion and appeals to what you think is your better self. Do not be fooled. The demons are counting on us to give up.

Please do your part. Do your own research. Share relevant articles. Apply the principles of logic. And pray as though your life depended on it, because it does.

Nothing is insurmountable for God.

The Great Reset isn’t a US only Agenda, it goes far beyond.
Should Biden prevail, then we will have Covid till the end of times, technocracy rule, and enslavement of the western world.
We can already see the destruction occurring both in North America and Europe. And Biden team/Fauci have already declared that it will be mandatory masks, extended lockdowns and vaccines for all.

And also an end to the second amendment.

No, this election result goes far beyond simple geopolitics.

More:
Natural News: US infrastructure to be converted to a mass vaccine compliance system, rife with propaganda and entry requirements
The Saker: Who’s World Order??
Economic Collapse: Our COVID Police State Wants To Take Thanksgiving And Christmas Away From You Too
Peace or Freedom: And this is another reason why politicians have a lower approval rating that herpes
Natural News:  All-powerful CDC calls for concentration camps in America, including the invasion of homes and neighborhoods
Posted by Adrienne at 11:14 AM