After allowing, and tacitly encouraging 95 days of destruction, riots, looting, and mayhem in his city culminating in the shooting death of Aaron Danielson, aka as Jay Bishop, by a rabid Antifa member, this weasel has the audacity to blame Trump?

I'm not often left speechless, but after the latest goings on in Portland, there is nothing left to say. 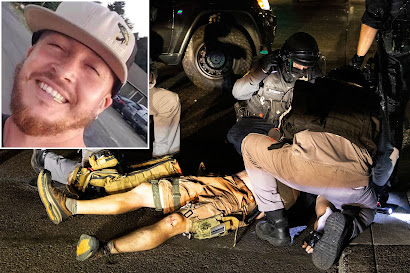 After Jay Bishop was gunned down in the streets of Portland, Antifa members  called Jay a "Nazi", cheered, and shouted they "took out the trash."

You would have to be possessed by an evil spirit to spew such hate and celebrate the violent unwarranted death of a fellow human being.

Townhall: Rioters Left Behind a 'War Zone' That Residents Now Have to Clean Up  I had no idea the destruction in Kenosha was so bad.

Part of her statement:

“The right-wing group Patriot Prayer and self-proclaimed militia members drove into downtown Portland last night, armed and looking for a fight. Every Oregonian has the right to freely express their views without fear of deadly violence. I will not allow Patriot Prayer and armed white supremacists to bring more bloodshed to our streets.

“Time and again, from Charlottesville to Kenosha to Portland, we have seen the tragic outcome when armed right-wing vigilantes take matters into their own hands. Gun violence is never, ever the answer.

Do I need to remind this witch that it is her and the mayor of Portland who have left the city devastated by riots? Since when is looting and burning down a city "the right to freely express their views?"  Do I also need to remind her that her precious "protesters" are the ones who perpetrated violence - not the Patriot Prayer group?