Consuming too much MSM is hazardous to your health...videos included...

in fact, right now consuming too much "news", even from reliable sources, can be hazardous to your health.


"Our country is being destabilized on purpose.

The craziness you are being forced to partake of is nothing more than a bunch of people devoid of any belief in a force larger then themselves.  When you don't believe in the God of the bible, you will fill the void with anything that makes it possible to marinate yourself in your own brand of morality. Most important - it makes you feel good about your arrogance and ignorance.

Let's face facts. There are 331,002,651 million people in the United States of America.  If you're a news junkie (guilty) you'd think that at least half of these people are rioting, looting, marching, and generally acting like jerks.  That would be about 160 million people. We can see that's not true.

The MSM is gaslighting you.  They continue, along with the commie/libtard mayors and governors, to call violent protests "peaceful."

They stand behind men who think they're women (they're not), that a marriage can occur between two men or two women (it can't), and that a baby that is violently ripped from its mother's womb is "not human" (it is.)

The following article by Stephanie A. Sarkis Ph.D. is the best explanation of how gaslighting works.  I've been gaslighted by members of my own family and the day came when I finally had to walk away. It saved my sanity.  Every single one of the following signs occurred before I twigged to what was happening. And all eleven signs can be applied directly to MSM.


1. They tell blatant lies.
You know it's an outright lie. Yet they are telling you this lie with a straight face. Why are they so blatant? Because they're setting up a precedent. Once they tell you a huge lie, you're not sure if anything they say is true. Keeping you unsteady and off-kilter is the goal.
2. They deny they ever said something, even though you have proof.
You know they said they would do something; you know you heard it. But they out and out deny it. It makes you start questioning your reality—maybe they never said that thing. And the more they do this, the more you question your reality and start accepting theirs.
3. They use what is near and dear to you as ammunition.
They know how important your kids are to you, and they know how important your identity is to you. So those may be one of the first things they attack. If you have kids, they tell you that you should not have had those children. They will tell you'd be a worthy person if only you didn't have a long list of negative traits. They attack the foundation of your being.
4. They wear you down over time.
This is one of the insidious things about gaslighting—it is done gradually, over time. A lie here, a lie there, a snide comment every so often...and then it starts ramping up. Even the brightest, most self-aware people can be sucked into gaslighting—it is that effective. It's the "frog in the frying pan" analogy: The heat is turned up slowly, so the frog never realizes what's happening to it.
5. Their actions do not match their words.
When dealing with a person or entity that gaslights, look at what they are doing rather than what they are saying. What they are saying means nothing; it is just talk. What they are doing is the issue.
6. They throw in positive reinforcement to confuse you.
This person or entity that is cutting you down, telling you that you don't have value, is now praising you for something you did. This adds an additional sense of uneasiness. You think, "Well maybe they aren't so bad." Yes, they are. This is a calculated attempt to keep you off-kilter—and again, to question your reality. Also look at what you were praised for; it is probably something that served the gaslighter.
7. They know confusion weakens people.
Gaslighters know that people like having a sense of stability and normalcy. Their goal is to uproot this and make you constantly question everything. And humans' natural tendency is to look to the person or entity that will help you feel more stable—and that happens to be the gaslighter.
8. They project.
They are a drug user or a cheater, yet they are constantly accusing you of that. This is done so often that you start trying to defend yourself, and are distracted from the gaslighter's own behavior.
9. They try to align people against you.
Gaslighters are masters at manipulating and finding the people they know will stand by them no matter what—and they use these people against you. They will make comments such as, "This person knows that you're not right," or "This person knows you're useless too." Keep in mind it does not mean that these people actually said these things. A gaslighter is a constant liar. When the gaslighter uses this tactic it makes you feel like you don't know who to trust or turn to—and that leads you right back to the gaslighter. And that's exactly what they want: Isolation gives them more control.
10. They tell you or others that you are crazy.
This is one of the most effective tools of the gaslighter, because it's dismissive. The gaslighter knows if they question your sanity, people will not believe you when you tell them the gaslighter is abusive or out-of-control. It's a master technique.
11. They tell you everyone else is a liar.


By telling you that everyone else (your family, the media) is a liar, it again makes you question your reality. You've never known someone with the audacity to do this, so they must be telling the truth, right? No. It's a manipulation technique. It makes people turn to the gaslighter for the "correct" information—which isn't correct information at all.


Here's a couple of videos that back up 100% the concept of gaslighting.

Tucker on BLM and how people are caving to this "movement." He also notes the number of people who are losing their jobs and are being ostracized for not taking a knee to these group of ignorant, arrogant, and racist malcontents.

But, know this -  for the few people who are making the news for speaking out, there is 10K who are lying in the weeds because they have a family to feed and can't lose their job.  These people will show up in November and vote Donald J. Trump to a second term of president of the United States.

Take a break from the "news."  Take some time to write in a journal, plan your day, read something uplifting, and most of all - pray.

I'll be checking out shortly after posting this. I'll pop in ever so often to join the conversation, but for the most part I'll be doing much more important things than having my mind poisoned by lies.

Mundabor's Blog:  The Big Emptiness, And How It Connects To The Rise Of Madness 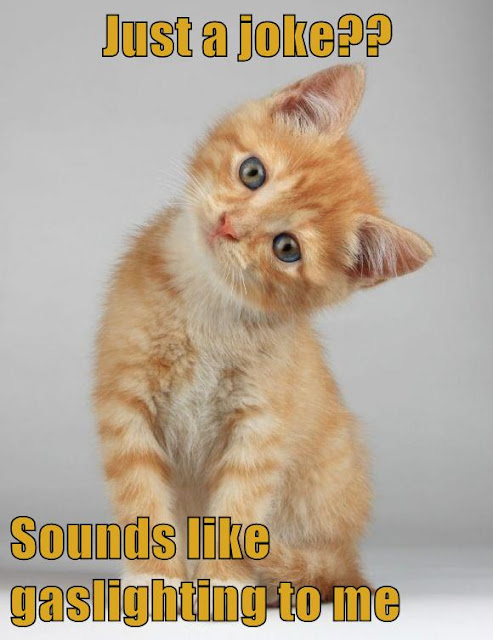