in particular when you're trying to appease feral miscreant criminals.

All this kneeling, flopping around on the pavement, marching, and apologizing for being white by mostly grown men is repugnant.

Remember when the Jews thought they'd "go along to get along?" Didn't work out too well, did it?

Poster boy for soi, Mayor Jacob Frey in Minneapolis, found out how well that works when he dared to not accede to every demand of the mob and had to slink off while being jeered by the mob.

Not to be outdone, Mayor Garcetti of LA, another contender for soi boy of the year, thought he'd look all "woke" if he took a knee with criminals.

And just this morning we have Nancy Pelosi, fake baby killing "Catholic", along with a bunch of other dems, taking a knee at the capitol with some sort of African rag hanging around their neck and their masks of subjugation firmly tied on their faces.  If you actually want to watch the spectacle, Breitbart has the video.

Wooo boy, who's going to haul her ancient high heel wearing ass off the floor after 8 minutes?? 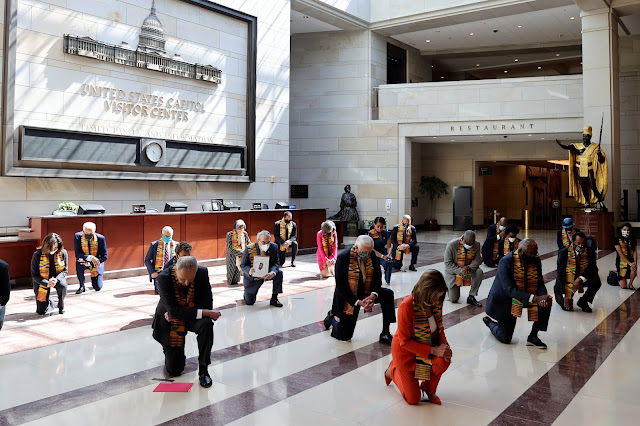 And now all these "woke" SJW social justice warriors want to disband all the police departments.  Good luck with that. Have they never heard of democrat run police unions?

If any of you reading this are police officers I would highly recommend you find a new profession post haste.

Want to see what happens when the police stand down?

The Night Wind:  Thought Reform  Another well done article from the creature of the night

Kurt Schlichter: More Than Ever, It’s Time to Unleash the Power of 'No' No one does snark like Kurt.

Email ThisBlogThis!Share to TwitterShare to FacebookShare to Pinterest
Labels: Appeasement