Add "Selfish" to the List of Things Bad about Trump Supporters...

because we won't wear a useless filthy mask.

There you have it fellow travelers.  We're no longer just a deplorable, racist, homophobic, xenophobic, bitter clinging, red-neck pack of Nazi dirt people.  No, my precious pineapples, we're now hit with the ultimate of insults by the social justice warriors.  We don't care if we kill people.

Governor of Michigan, Gretchen Witless, being a bit unimaginative is still spewing "racist." Catch up, Gretch - because we're selfish. Capisce?

I've conceded to the fact that nothing will ever be the same "normal" as perceived by the people on the right. We've witnessed police arresting people for sitting alone in a park, reprimanding mothers who have allowed their children to play, and just generally "following orders."  Didn't see that one coming did we? And suddenly "church" is not longer essential.

I never imagined people running their lives based on fear of the unknown. Only someone who doesn't believe in the Divine would be willing to destroy the livelihood and lives of others in a quest for their own safety and then tell them it's their fault because they're selfish. I call that the ultimate in gaslighting.

I try and convince myself it's still a free country (not easy) and if you wish to wear a rag on your face, that's perfectly okay with me. Just don't try and tell me it makes you smarter and more compassionate, because I'm not buying what you're selling.

Monday is my favorite day of the week.  And the first Monday of the month is doubly great. Yesterday I did my goals for May and allowed for the weather when I decided on the completion date.  This week is scheduled to the best of my ability.  My dear friend, Mary Lynn's rosary and Requiem Mass is this week, but due to Wuflu lock downs the day and time are not yet set.

Don't forget about the GoFundMe for our blogging sister and her family who lost their home in recent tornadoes. And to all those who have dug deep to help these wonderful people, may God bless you.

Lloyd Marcus:  The Internal Battle for America  "Evidence confirms that the coronavirus lockdown is a political weapon for Democrats to defeat Trump in November. Fear of this flu virus also gifts them an opportunity to behave like totalitarians, freely implementing their communist agenda."

Gateway Pundit: Wicked #NeverTrump Group Releases “Mourning in America” to Trash President Trump During Worst Pandemic in a Century But, of course

Dennis Prager:  Our Dress Rehearsal for a Police State  It's well under way.

Michael Brown at ChristianPost:  Is the media engaging in psychological warfare against America?  Yes - next question

Quite awhile ago I thought, "You need to start running this blog like an adult and skip the kitteh pics." People were not pleased, and frankly I don't give a rip anymore - so the kitteh rules. 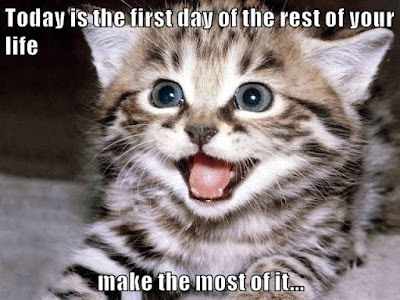