The hatred of the commie/libtards is breathtaking in its vileness...

They want you dead.

Not everyone -just you deplorable Christians.

From Nancy "fake Catholic" Pelosi saying, "As the president fiddles, people are dying. We just have to take every precaution."

Laura Krolczyk, Roswell Park's vice president for external affairs, was initially placed on administrative leave from her position but was fired following the conclusion of an investigation into her remarks, spokeswoman Annie Deck-Miller confirmed Saturday.  In a social media post Krolczyk said "Trump supporters need to pledge to give up their ventilators for someone else ... and not go to the hospital." Her buddy LaTrovato responded:
"I think they should be the only ones in packed churches on Sunday."  Read it all- it's excellent peek into the minds of pagan Christ haters.

You can rest easy, little lady, we will be the only ones in church on Sunday.

Random goofs living in the blue twin cities of Minnesota actually saying on Facecrap. I wonder where they get their news:


We do need Walz and Cuomo to run the Coronavirus response. I’m not going to have any hair left if I have to listen to the president many more times.
4
and

How about some other random goofs living in New Zealand?  Why in hell would a bunch of nobodies in New Zealand give a fig about what Trump does?   I'll spare you the 34 long comments from Facecrap where President Trump was called an idiot, incompetent, stupid, Adolfs brother, madman, and wishing for an assassin to take him out.

Mainly because of a clip where our president said he would really love to see our churches full on Easter morning. Mind you, he didn't say they would be - just that it would be wonderful for Christians to be able to gather together to worship God.

Since New Zealand is largely a very secular (pagan) country I can see why the thought of people worshiping on Easter Sunday would give them hives.

We have an op-ed in the New York Times "The Religious Right’s Hostility to Science Is Crippling Our Coronavirus Response.  Trump’s response to the pandemic has been haunted by the science denialism of his ultraconservative religious allies."

This by people who deny that a developing baby in the womb is a human being and think that there's 30 or 40 different genders.

This blatant attack on Christians by a MSM outlet as large as the New York Times should give everyone something real to worry about.  It's is not hard to notice that the overwhelming amount of hatred is towards Christians.

Today is Passion Sunday which is the beginning of the of a two-week-long period known as Passiontide ending on Holy Saturday.  The crucifixes, statues, and images are covered with purple/violet colored cloth. This veiling is associated with Passion Sunday's Gospel (John 8:46-59), in which Jesus "hid himself" from the people. 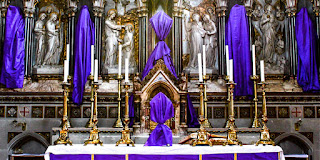 At the end of the Good Friday service the crucifixes will be unveiled. At the Easter Vigil during the singing of the Gloria, with has been suppressed during Lent, the statutes and images will be unveiled and the Easter lilies placed on the altar to celebrate the Resurrection of the Lord.

This year Christians will sacrifice the glory and wonder of celebrating Easter with our fellow Christians.

Tomorrow I will make another attempt to do a regular shopping trip to Costco.  I'm planning my arrival for about an hour after they open (11:00 am) when the first wave of shoppers is usually leaving.

If there should happen to be some toilet paper I will buy it. Not because I need it. I have plenty even after already giving away about 50 rolls, but because I have disabled and elderly friends who might need it.  And, no - I'm not a hoarder. I take advantage of sales of Marathon TP at Costco. With 48 rolls per cube it doesn't take long to build up a bit of stored TP. It's called being prepared.

Since I will probably not be here tomorrow I will leave you with this beautiful video and song.  I first saw this about a week ago on the wonderful and uplifting blog, Bluebird of Bitterness - and we thank her.

Do watch it in full screen. The visuals are outstanding.

Newsbusters:  Occupy Democrats Posts Facebook Meme Asking GOP Senators ‘to Die’  No real Christian would ever, ever wish or hope for such a thing. Therefore, those on the left must be pagans.

The Nightwind: GUIDE TO UNDERSTANDING THE NEW NORMAL A handy guide

Gateway Pundit: Rhode Island Public School Teacher Offers to Pay for Someone With Coronavirus to Cough on President Trump And you allow your children to attend state run schools with teachers like this?