Are the commie/marxist/libtards really a flock of starlings?...

birds of feather it would seem.

And a lesson to be learned.

Starlings are the pests of the bird world.  We have quite a few around here, but since I live on 5 acres, they don't really cause too much of a problem.

Growing up in St. Paul, MN, they would come home to roost every evening in some neighborhoods causing quite a mess.  The bird poo would get so bad in the streets cars were sliding in it.

A few days ago a huge flock of probably over a hundred settled in the fenced area behind our house. I watched them closely as they hopped around and suddenly, for no apparent reason, they flew off in a tight little group only to come back in less than a minute.  This continued on for some time.

While this behavior, called murmuration, can be quite pretty to watch, it still seems rather mindless.

Suddenly it occurred to me that there was never any other birds around their noisy group.  You see, we have a bird feeder on our back deck during the winter and it is usual to see finches, black capped chickadees, juncos, flickers, and robins sharing the feeder.  The quail and the occasional pheasant scour the deck for seeds the little birds knock to the ground. They do this together in apparently good humor. But you never see other birds around the starlings.

Hmmmm.  Could it be because the starlings are like our modern day commie/marxist/libtards and the other birds are of a more conservative bent?

The starlings act together like you would expect a crowd or a mob to behave.  They never act as individuals.  They're avoided by more easy going happy birds who share the seed wealth.  They come and go in groups, are not very pretty by bird standards, and their chirping could only be considered raucous and pointless.  That pretty well describes the average libtard, doesn't it?

And the lesson to be learned?

Don't be a starling.  Be an individual.  Choose your friends wisely and know your enemies.  If you hang about with the wrong type, sooner or later their attitudes will become your attitudes.  In a quest to be accepted people will eventually take on the plumage of the people with whom they flock.

Never forget that the liberals who scream and harass you are aware, in some dark corner of their subconscious, they're evil and want company as they march off into the dark.

Don't fly off the cliff with them. 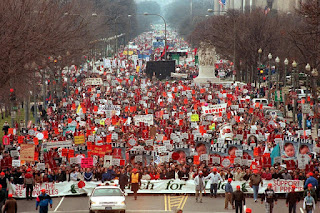 Later this week on Friday, January 18th, the annual March for Life will take place in Washington, DC. Hundreds of thousands of happy little birds will gather together to support the right to life for pre-born babies.  They're a diverse group but they share the same common goal.  As always, it will mainly be ignored by the MSM. 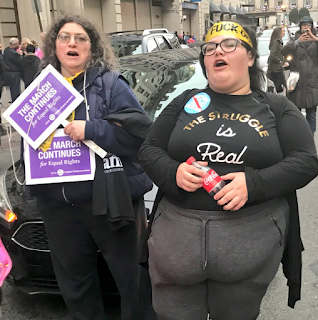 The following day a group of women who have branded themselves The Women's March (not this woman) will march for something or another.  No one is quite sure what the main thrust of these hive-minded lemmings starlings is.  The only thing we're sure of is they're angry, will carry vulgar, indecent signs, and scream incoherently.  They're so vile even the Democratic National Committee has removed their sponsorship.  At least we'll be spared the pink pussy hats and women dressed as vaginas (ugh) since the anti-semitic leaders have banned them.


We'll talk more about the psychology of crowds later this week.  In the meantime, go find some nice peeps to hang out with.

Whoever walks with the wise becomes wise, but the companion of fools will suffer harm.

Save up to 45% on Cuisinart Cast Iron Cookware

Lots of great deals in Grocery

Ends at midnight
Posted by Adrienne at 11:01 AM