Obviously, women being allowed to vote is not going away.  The question is - was it a good idea?

Several days ago Steve Marks had an article at American Thinker titled Why Suburban Women Cost the Republicans the House.  What followed was 949 comments, many agreeing with him and many thinking he was a sexist POS.

Mr. Marks does start his article with a disclaimer: (emphasis mine)

Did suburban women cost the Republicans the House of Representatives?

Most suburban women can be easily persuaded to vote for Democrats because they do not think seriously. Serious thinking in the political sense is concerned with where we are going as a nation, our moral values, our long-term prosperity, our security, our freedom and its inherent responsibilities. G.K. Chesterton said, “Thinking means connecting things, and stops if they cannot be connected” (Orthodoxy, 1908).

Don’t get me wrong – there are many intelligent, serious conservative women in Fairfax County (not to mention the nation as a whole), but they are sadly in the minority. From my limited and unscientific perspective, the reason most suburban women voted for Democrats can be divided into three categories:

You may want to read the entire article before continuing here.


I have often thought over the past few years that women attaining the vote was not such a great idea.  Now for my disclaimer:  I agree that there are plenty of savvy women roaming around the country.  But, I will also have to agree with Marks when he says they are in the minority.

In today's confused times when people are no longer able to tell the difference between a man and a woman, the idiocy has reached epic proportions.

The nature of man is to be the protector and provider for his family. His brain is predominantly hard-wired for understanding and building systems. The nature of woman is to be the keeper of the home and the guiding hand behind the raising of children.  Her brain is predominantly hard-wired for empathy.  That is called "science" for any commie/marxist/libtards who may be lurking about.

That is the reason women can be so easily conned into voting for policies which are socialist.  The feelz one gets from thinking that they're taking care of the poor and downtrodden outweighs any practical application of how to accomplish this.  It's the reason a dimwit like Occasional-Cortex when asked how to pay for Medicare for All answers, "You just pay for it."

There is no doubt in my mind that part of the communistic take over of any country is to instill discontent and discord between men and women.  I'd say they've done a pretty good job of it in the U.S.  Women have been convinced that motherhood is slavery, being a "housewife" is demeaning, and working outside the home is freedom.


Serious thinking in the political sense is concerned with where we are going as a nation, our moral values, our long-term prosperity, our security, our freedom and its inherent responsibilities.

Notice that what he calls serious political thinking involves systems - an area where men excel.

If you doubt any of the above, visit the Pinterest page of any women and you will find copious pics of decor, recipes, fashion, crafts, and lovely gardens.  Her nature gravitates toward nurturing and beauty.

If a guy were to have a Pinterest page, I guarantee it will be littered with guns, videos on repairing or building something, and random jokes about farting. There's a reason Hobby Lobby is full of women and Home Depot is mostly full of men.

The feminist movement destroyed the lives of numerous women.  For the suburbanite types Marks focuses on who have idle time being eaten up by useless activities to the women of lesser means, who are left with illegitimate children, food stamps, and section 8 housing.  And none of them are particularly happy. 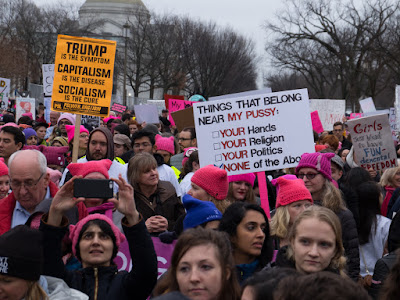 If you look at the Facecrap page of the Women's March, you will witness the hatred, discontent, and (free) abortion demanding women of today.  Their concerns are typically feminine with no thought to systems or the way to accomplish their pipe dreams of world peace and all the other blather. If you tried to tell them that the way to peace and prosperity was to go the heck home, take care of their husband, and raise thoughtful educated children they would boo you off the page.  I know that for a fact.

In a very short time historically we have gone from women not showing their ankles to protesting with their breasts exposed.  No longer are they the civilizing factor in society curbing the worst instincts of men, but have become a destabilizing influence. And just like Adam being bamboozled by Eve, many of the men have gone along with the agenda hence the soy-boy beta male we laugh about.

Let me move on and really piss off a bunch of peeps with some "God talk."

God had a plan.  He made men and women to be complimentary.  He wanted to ensure that his creatures would reproduce and be loving companions to each other and love Him above all. To try to make it otherwise is to produce a bunch of unhappy cranky people - both men and women. It's as simple as that.

Back to the original question.

Was the female vote a good idea?

I purchased this a few weeks ago and have been quite impressed with how it works.  If you have a wonky neck, I can recommend this: