during the month set aside to celebrate sodomy.


The justices, in a 7-2 decision, faulted the Colorado Civil Rights Commission's handling of the claims brought against Jack Phillips, saying it had showed a hostility to religion. In doing so, the commission violated his religious rights under the First Amendment of the U.S. Constitution.

But the court did not issue a definitive ruling on the circumstances under which people can seek exemptions from anti-discrimination laws based on their religious views. source 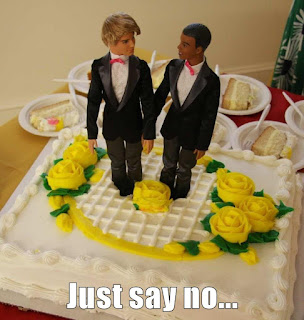 Let's get something straight (no pun intended.)  Businesses are not refusing to serve people who are homosexual.  Christian-owned businesses are simply not wanting to use their art to participate in practices that are clearly wrong.  That would include a baker refusing to make a cake with a Nazi symbol on top, or any other offensive depiction.

In almost every case where a business owner has been harassed and sued, often into bankruptcy, the homosexuals suing have been previous customers - sometimes for years.

I know many people do not agree with me on this point, but anti-discrimination laws are nothing more than weapons for a different type of discrimination.  The constitution was not designed to soothe your constantly ruffled and offended feathers.

A  person should be able to set parameters within their business operation whether you like it or not.  The free market will sort it out post-haste.

Email ThisBlogThis!Share to TwitterShare to FacebookShare to Pinterest
Labels: anti-discrimination