a day reserved to honor those who have died in armed service to our country. 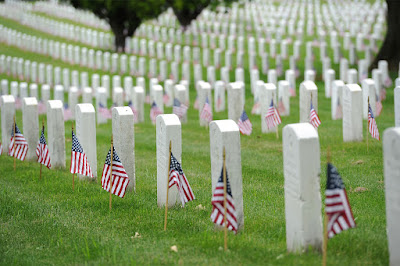 Since the 1970's Memorial Day has been observed on the last Monday of May.  The flag is lowered to half-staff until noon. The half-staff position remembers the more than one million men and women who gave their lives in service of their country. At noon, their memory is raised by the living, who resolve not to let their sacrifice be in vain, but to rise up in their stead and continue the fight for liberty and justice for all.

So while you enjoy your weekend, take time to remember and say a prayer for those who made it possible.

Who are the Real Stars?

The following column was written by Ben Stein, who summers in our lovely Sandpoint, ID just north of where I live.

While it is not specifically addressed to the heroes who gave their lives in defense of our country, it does put in perspective who are the real "stars" of the world.


For many years Ben Stein has written a biweekly column for the online website called "Monday Night At Morton's." (Morton's is a famous chain of Steakhouses known to be frequented by movie stars and famous people from around the globe.) Now, Ben is terminating the column to move on to other things in his life. Reading his final column is worth a few minutes of your time.


How Can Someone Who Lives in Insane Luxury Be a Star in Today's World?

As I begin to write this, I "slug" it, as we writers say, which means I put a heading on top of the document to identify it. This heading is "eonlineFINAL," and it gives me a shiver to write it. I have been doing this column for so long that I cannot even recall when I started. I loved writing this column so much for so long I came to believe it would never end.

It worked well for a long time, but gradually, my changing as a person and the world's change have overtaken it. On a small scale, Morton's, while better than ever, no longer attracts as many stars as it used to. It still brings in the rich people in droves and definitely some stars. I saw Samuel L. Jackson there a few days ago, and we had a nice visit, and right before that, I saw and had a splendid talk with Warren Beatty in an elevator, in which we agreed that Splendor in the Grass was a super movie. But Morton's is not the star galaxy it once was, though it probably will be again.

Beyond that, a bigger change has happened. I no longer think Hollywood stars are terribly important. They are uniformly pleasant, friendly people, and they treat me better than I deserve to be treated. But a man or woman who makes a huge wage for memorizing lines and reciting them in front of a camera is no longer my idea of a shining star we should all look up to.

How can a man or woman who makes an eight-figure wage and lives in insane luxury really be a star in today's world, if by a "star" we mean someone bright and powerful and attractive as a role model? Real stars are not riding around in the backs of limousines or in Porsches or getting trained in yoga or Pilates and eating only raw fruit while they have Vietnamese girls do their nails.

They can be interesting, nice people, but they are not heroes to me any longer. A real star is the soldier of the 4th Infantry Division who poked his head into a hole on a farm near Tikrit, Iraq. He could have been met by a bomb or a hail of AK-47 bullets. Instead, he faced an abject Saddam Hussein and the gratitude of all of the decent people of the world.

A real star is the U.S. soldier who was sent to disarm a bomb next to a road north of Baghdad. He approached it, and the bomb went off and killed him.
A real star, the kind who haunts my memory night and day, is the U.S. soldier in Baghdad who saw a little girl playing with a piece of unexploded ordnance on a street near where he was guarding a station. He pushed her aside and threw himself on it just as it exploded. He left a family desolate in California and a little girl alive in Baghdad.

The stars who deserve media attention are not the ones who have lavish weddings on TV but the ones who patrol the streets of Mosul even after two of their buddies were murdered and their bodies battered and stripped for the sin of trying to protect Iraqis from terrorists.

We put couples with incomes of $100 million a year on the covers of our magazines. The noncoms and officers who barely scrape by on military pay but stand on guard in Afghanistan and Iraq and on ships and in submarines and near the Arctic Circle are anonymous as they live and die.

I am no longer comfortable being a part of the system that has such poor values, and I do not want to perpetuate those values by pretending that who is eating at Morton's is a big subject.

There are plenty of other stars in the American firmament...the policemen and women who go off on patrol in South Central and have no idea if they will return alive; the orderlies and paramedics who bring in people who have been in terrible accidents and prepare them for surgery; the teachers and nurses who throw their whole spirits into caring for autistic children; the kind men and women who work in hospices and in cancer wards.

Think of each and every fireman who was running up the stairs at the World Trade Center as the towers began to collapse. Now you have my idea of a real hero.

We are not responsible for the operation of the universe, and what happens to us is not terribly important. God is real, not a fiction; and when we turn over our lives to Him, He takes far better care of us than we could ever do for ourselves. In a word, we make ourselves sane when we fire ourselves as the directors of the movie of our lives and turn the power over to Him.

I came to realize that life lived to help others is the only one that matters. This is my highest and best use as a human. I can put it another way. Years ago, I realized I could never be as great an actor as Olivier or as good a comic as Steve Martin...or Martin Mull or Fred Willard--or as good an economist as Samuelson or Friedman or as good a writer as Fitzgerald. Or even remotely close to any of them.

But I could be a devoted father to my son, husband to my wife and, above all, a good son to the parents who had done so much for me. This came to be my main task in life. I did it moderately well with my son, pretty well with my wife and well indeed with my parents (with my sister's help). I cared for and paid attention to them in their declining years. I stayed with my father as he got sick, went into extremis and then into a coma and then entered immortality with my sister and me reading him the Psalms.

This was the only point at which my life touched the lives of the soldiers in Iraq or the firefighters in New York. I came to realize that life lived to help others is the only one that matters and that it is my duty, in return for the lavish life God has devolved upon me, to help others He has placed in my path. This is my highest and best use as a human.


Abortion and the Irish

Today the people of Ireland vote on whether to abolish the strict anti-abortion lase of that nation.  Take a moment while praying for our fallen heroes to pray that Ireland will vote for life.

I credit the Food Saver with saving me thousands of dollars over the years.

The pre-made bags I use are from Food Vac Bags.  Great product, great value, and great company. 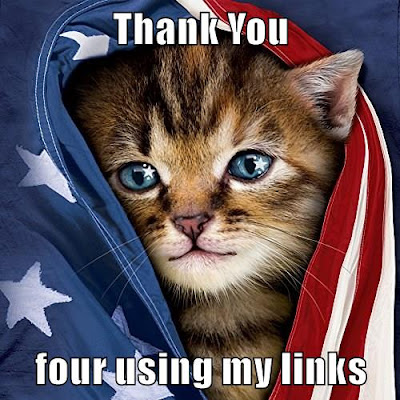 I receive a small commission when you purchase through my links - at no additional cost to you.  I am most grateful!