it's not completely clear which is which.

Over the past weeks the number of articles attacking the tactics of Facebook are springing up everywhere.

There is no doubt that Facecrap can become a dangerous time sink - stealing from us the only real thing we possess - our time.

How many books are not being written, paintings conceived of and executed, books not being read, children not being attended by their parents, and relationships destroyed by the constant need to "just check Facecrap for a minute?"  We all know that minute turns easily into a hour or two.

Here's just what I ran into this morning:

Facebook may have broken FTC deal in Cambridge Analytica incident

Cambridge Analytica: So What?

Was Trump Elected Because of Cambridge Analytica Facecrap Data Mining?

The art of propaganda was conceived of when Satan convinced Eve that eating the forbidden fruit would give her access to all the knowledge of the universe.

Somewhere over the years we started calling it advertising.

Does anyone still believe that the purpose of advertising is nothing more than telling you about the wonders of a product without utilizing polls, questionnaires, and human psychology?

The difference today is it's done at the speed of light.

The only thing people are upset about what Cambridge Analytica did is because it may have benefited the Trump campaign.  You see if the opposition research is done for the benefit of the left, it's A-okay.

Obama practically had an office set up at the Facecrap headquarters, but that's been buried by the dishonest, lying, venomous, skewed MSM.

I have a Facecrap account and fully understand that they collect my data.  However, I am presently worried about the time I waste looking at things that are of no use to me.  Using it for keeping up with local events is important to me.

I also link my posts in an effort to reach a few more people.  There is also not one teeny doubt in my mind that Facecrap has started to shadow ban my posts.

I have decided to severely limit the time I waste on Facecrap.  If I can't honor my decision, I will delete my account.

So How About the Nazis? 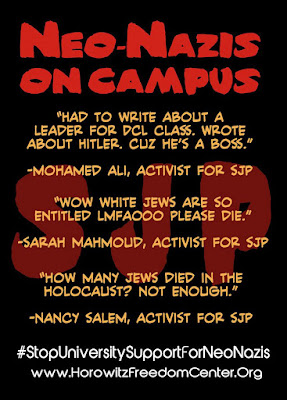 The David Horowitz Freedom Center’s bold new campaign to expose the rampant anti-Semitism and dangerous, genocidal rhetoric of Students for Justice in Palestine (SJP) and the Muslim Students Association (MSA) and their student supporters across the nation is officially underway.

The campuses of four California universities –UC Berkeley, San Francisco State University, UCLA, and USC— have already been blanketed with hard-hitting, fact-based posters that detail the virulent Jew-hatred of these activists and the neo-Nazi-sympathizing professors who try to grant them moral authority. read the rest


Half a century ago, the leaders of a synagogue in Cleveland erected a banner in front of their building to call attention to Jews who were being persecuted by the communist Soviet Union.

They couldn’t have imagined at the time that they were launching a movement that went even beyond saving the Jews they cared about: It helped bring down the entire Soviet Union.

One observer, noting how the grassroots effort led to legislation that put economic pressure on the Soviet Union – a tactic emulated and expanded by President Reagan – summarized the story this way: “A few people with signs led to the destruction of an empire.”

That’s the inspiration behind a new effort by a growing coalition of activist groups called Save the Persecuted Christians. read the rest

This is an important point for you to consider:

When we speak about Nazis, Marxists, Fascists, Bolsheviks, SJW's, liberals, progressives, and feminists - to name just a few, we are talking about only one thing:

the desire by a group of people to create utopia on earth and willing to cram it down your throat by force if necessary.

Because they have no concept of the true meaning of freedom.

When You Stop Checking Facebook Constantly, These 10 Things Will Happen  (take note of number 10!)

Save up to 40% on Easter favorites from Crayola

My mom always put together wonderful Easter baskets.  Oh sure - we got some candy, but mostly we got books, art supplies, and all manner of creative stuff.


I receive a small commission when you purchase items through my Amazon links - and I thank you.